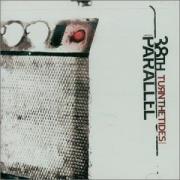 After hearing about Word Records's acquisition of Squint Entertainment and the tragic expulsion of Steve Taylor, it took me by surprise that the newest roster signee was hard-rock band 38th Parallel. After all, isn't Word more renowned for contemporary artists like Amy Grant, Point of Grace, and Fernando Ortega? Now that I've heard 38th's Turn the Tides debut, I think maybe it wasn't such a bad move after all. Word is sure to catch a glance from the younger crowd because of this deal.

Moving on though, 38th Parallel is not a band to be taken lightly. These guys have a sound tighter than the "blue-and-yellow-makes-green" seal on a Ziploc bag and likens to mainstream bands Limp Bizkit and Linkin Park, only more wholesome. The band's key to success lies not in how loud they can be but in their consummate harmonies that spot the disc, beginning with "Hear My Cry." It's a bit weak for an opener, but it allows the listener to become familiar with Mark Jennings's gritty lead vocals. Shane Moe rocks with flair as he shows off his talent at creating thunderous chords and shock effects, but you'll notice he uses little to no distortion at all on the record. A sure to be fan-favorite is track #2, "Turn the Tides." Beginning with fast-paced rap, the song takes a dark, twisted turn during the chorus where you can definitely hear their resemblance to Linkin Park. Although it's the heaviest song on the album, the bridge adds string instruments to the mix, and everybody knows that string instruments sound really cool in a rock song. The only problem with "Turn the Tides" is that it's too repetitive and may grow stale on the ears.

Heaviest doesn't always mean best. In this case, "Horizon" takes the honor of best track on the CD. An optimistic tune about the return of Christ, "Horizon" has it all; it starts off with soft, gentle singing and blooms into violent rap before the first verse even ends. Backed up by shining harmonies, a killer drum loop, and gleaning guitars, the melodic chorus resounds, "When my hope is tattered and torn, when my faith is weathered and worn, I'll look to blue horizons." The track then closes as it began with a mid-tempo guitar groove. Bliss, indeed. 38th Parallel later makes a declaration to the Lord singing "You Are My God," a worship song tuned to rock music. The lyrics are some of the most artistic and profound on this project: "Sneering smiles fill my ears and laugh at tears that fall from the weight of unspeakable fears. I wonder aloud in curious tones, 'Could I be proud when they hate and mock me?'" More radiant harmonies fall during the chorus, and listeners will notice the heavily prevalent strings during this cut as well. The rap-core bridge that extends to the song's finish is a nice touch.

Props to the band for writing track #9, "Wither." It's about victims of the AIDS virus, an overlooked subject even in Christianity. While Jennings and Rippke alternate lead vocals, rapping, and singing, they plead to the rest of the world to step out of their comfort zones and love on the victims of this deadly disease. The vocalists are backed up courtesy of some crunchy, metal rock, and the chorus switches between singing and screaming as well. You can even hear the anguish in the cries of the band members. Other subjects mentioned on Turn the Tides include doubt ("Clouded"), faults with judging others ("Who Am I"), man's ignorance of looking to God for love ("State of Mind"), and the emotions that Peter must have felt when he realized he denied Jesus ("Three Times Denied").

38th Parallel is a promising band with a rock-solid debut. If there's any complaining to be made at all, it's the fear that listeners will label this band unoriginal. Some might feel the band is mimicking their mainstream counterparts, but look at performers such as Plus One, Relient K, and Stacie Orrico and try to tell me they're not doing the same thing. Of course there's always room for improvement, so we're hoping we see 38th Parallel's talent at its fullest on their next record.