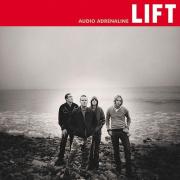 After ten years of being declared a "youth group band", Audio Adrenaline's latest offering, Lift, finds the group attempting to forge a more mature identity for themselves. The change is evident; from the drab, grey photograph on the liner notes to the last song on the album, there's no trace of any kidding around. While this might snag a larger fan base, longtime fans of AA will be startled at what Lift has to offer.

Going with the theme of the album, Audio Adrenaline has brought their lyrical insight and musical talent to a higher level. Proof comes in the form of "Ocean Floor," a mellow rock outing where the band assures listeners "They're all behind you / they'll never find you...your sins are forgotten / they're on the bottom / of the ocean floor." Such uplifting truths continue to stream through "Summertime," a reminder of Christ's promise to prepare a place for His children, and "This is Everything," a could-be-worship track where serving the Father is the only thing that matters. More praises fall like rain from the catchy title track, calling Christians to "forget about the world you're living in" and lift God as high as you can. Begging for mercy, Audio Adrenaline comes clean as they approach the throne of Almighty God, asking for forgiveness while they "Tremble" in his radiance.

From hearing the first radio single, "Beautiful," it would be easy to think the band has sold out to the Adult Contemporary market. What makes it more believable is the radio remix of the same song included as a bonus track on the CD. Thankfully, this is certainly not the case, as Lift's best musical gems are well-hidden. The album's opener, "You Still Amaze Me," finds the band masquerading as U2, nearly producing a carbon copy of their trademark style. The old bloOm sound is revisited on "I'm Alive," which will please many fans of AA's stripped down rock-n-roll sound. For good measure, an ample amount of programming was thrown in, giving the instruments - and at times the band's voices - a computerized sound. "Ocean Floor" is probably the best-done song all around, with its familiar "Good Life" guitar vibe and brilliant accompaniment. Skidding in close second is the spicy "Rejoice," which borrows a Red Hot Chili Peppers' "Love Rollercoaster" flavor. For the yet unconvinced, the bonus track "Lonely Man" is among the hardest rock hits Audio Adrenaline has ever done, almost overshadowing "Some Kind of Zombie." The in-your-face rapcore lyrics invite fans of all ages to jump up and headbang, while Christian rapper T-Bone brings the house down with a killer rap bridge. "Lonely Man" is easily due a #1 spot on radio.

If Lift has any shortcomings, it's that at moments the band oversteps maturity and ventures into plain boring. They more resemble a worn out antique (cough...Petra...cough) instead of the well-weathered band in their prime that Audio Adrenaline should be. This generally makes some of the material downright unimpressing, and it's difficult to make it past the middle portion of the album without letting out a sigh and skipping tracks. Furthermore, the fun-loving "youth group band" we all know and love has vanished. The usual zany tracks such as "The Houseplant Song," "Big House," and "DC-10" are nowhere to be found, and Lift drastically takes away from Audio Adrenaline's identity.

While this is far from the band's best work, Lift is not a disappointing album. It is, however, a serious departure and possible turning point. Chances are you'll be impressed, but if you don't want to ruin your current image of Audio Adrenaline, this one is best to be skipped.