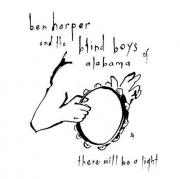 At that point the debate had surely been laid to rest, no? When Harper's alternately thin and soulful tenor sang along with choruses of "I've got a picture of Jesus/In His arms my prayers rest" and went solo with "Where could I go but to the Lord?" there could be no question of his religious affiliation. Right?

Not quite. Though there's a wealth of lyrical goodness in There Will Be a Light, ranging from an apt articulation of the seductive lure of sin on "Wicked Man" ("What's sweet by morning is bitter by the evening") to simpler lines like, "I'm gonna get/My soul in line [by going to church]," there are also points of concern.

"Where Could I Go" finds Harper without the Blind Boys, and its ultimate message is an uplifting one -- the lyricist turns to Christ after deciding that no other action would do. But it also contains a mild profanity, and the song suffers from theology that is slightly off-kilter -- at one point Harper asks another person to lobby God for his salvation because, "nothing else could save a sinner like me/But an angel's word."

The heart behind these words is most important, of course, and it seems to be a genuinely repentant one that curses out of the frustrating memory of an indifferent father. And it is out of humility that Harper doesn't want to face God -- he feels he isn't good enough and has strayed too far. But there's also "Well, Well, Well," which leaves my feeble brain scratching at, "Dig a hole in the ground straight down to hell/Till there ain't no more water in the well....When you're down on your knees with nothing left to sell/Try diggin' a little deeper in the well, well, well."

Still, all of this is overshadowed by the ample brilliance of the vocal and instrumental performances found here, and the simple but artfully-formed remaining lyrics. "Picture of Jesus" marks out the slow groove of a Motown ballad and fuses it with the simple vocal rhythm of a traditional hymn. "Satisfied Mind," an ode to finding contentment outside of riches, is painted on a simmering, bluesy canvas. Aforementioned songs are also the most transcendent from a musical standpoint: "Wicked Man," "Picture of Jesus," the title track and "Church on Time" are all indispensable, though "Take My Hand" merits repeated listens as well.

Harper's spirituality and minor lyrical foibles aside, this collection is essential from a musical standpoint, as is a good deal of what the venerable Blind Boys have accomplished this decade. Parents of younger children may want to skip a couple of the tracks when the kids are around due to how they might be interpreted by younger minds. And some may find the faults outlined here enough to reject the album entirely. But most songs glorify God unabashedly, and I imagine He smiled more than He frowned as this album was being made. We can almost guarantee the same will be true of you if you pick it up.