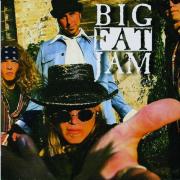 Do you often find yourself pining away for the days of bell-bottoms, long, flowing locks of hair, butterfly collars, and tie-dye? How about crunchy, guitar driven "freedom" rock? Do you remember wistfully the first time you heard Jimi Hendrix or Lynyrd Skynyrd? Did you waste months of your life attempting to learn "Stairway to Heaven" on the guitar? If you match this description, if you prefer to revel in days past, I'd like to welcome you to wonderland.

You see, Welcome to Wonderland is the debut release from Big Fat Jam, on Absolute Records. And BFJ (as they refer to themselves) cherishes those days at least as much as you. Which is kind of hard to figure. The band's members are all younger than 30 and grew up in the 60's-revival hotbed that is rural Minnesota (sarcasm intended). Nonetheless, they are what they are: a hard-rocking band that draws heavily on influences from Jimi Hendrix, Led Zeppelin, and Lynyrd Skynyrd.Much like secular groups Black Crowes and Tesla, BFJ does a credible job of mimicking music from that period in musical history. However, where the former bands stick mainly to churning out covers and sound-alikes of the heavy hitters of the genre, the latter takes pains to add other influences. To be certain, there are traces of Jimi Hendrix and Led Zeppelin to be heard in BFJ's music, but also found are hints of funk courtesy of Sly and the Family Stone. As one would expect, the album is heavy on the sort of twangy guitars that so typified the "freedom rock" genre. Lead singer Lance Dalbey's voice and delivery are somewhat reminiscent of Chris Robinson (of the Black Crowes), although he sometimes smacks of Stevie Ray Vaughn, however cross-genre that might be.

The band distinguishes itself from its secular contemporaries, though, in the spirituality of its lyrical content. The band truly considers their music to be a ministry, and their lyrics reflect this intention. Two major themes seem to permeate their writing: amazement at God's love, whether we deserve it or not, and the desperation of a life lived without Jesus. However, they also broach weighty, non-spiritual subjects. Referencing Martin Luther King, Jr., "All in the Family" is decries racism in favor of hand-holding and love. "Red White and Blue" celebrates both the blessings God has given America and the sacrifices made in the name of freedom, and its patriotic theme earned the band an invitation to perform in Incirlik, Turkey. BFJ was the first Christian rock band to perform for the troops stationed at the base.

With this album, BFJ has produced something truly different: a passionate, spiritual romp through the past. Unfortunately for them, all of their influences are relegated to the dustbin of music these days, and Welcome to Wonderland sounds just as out of time as any of them. Because of this, the potential audience is relatively small and the true spirit of the lyrics is wasted. Even if you are searching for something a little different and feel that this CD might fit the bill, don't get too attached. No matter how unlike the majority of the market their sound may be, as of this writing BFJ has announced that they are disbanding. Thus, they earn from me a hearty "Welcome!"—to the dustbin.