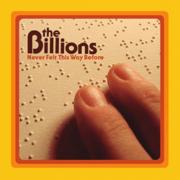 If relative youth and a spot in one of the industry's most well-respected independent record labels seem like a sure-fire springboard for those aspiring to alt-rock or emo pop stardom, the members of the Kansan foursome The Billions seem to have taken their influence, perhaps more than anything else, from simple upbringing and geography. Knee-deep in music nearly from birth, brothers Dan and Sam Billen and childhood friend Jared Bowes had already formed a deep-seated love of music by the time they entered junior high. This early musical exposure, together with the band's close working relationship with '70s rock veteran and fellow Topekan Kerry Livgren (who produced two of the group's first three independent albums) appears to have helped steer the lads in the direction of the music that their parents loved.

Not surprisingly, Never Felt This Way Before, the group's first release for the Northern Records label, features no short supply of pop and rock in their classic forms. "I Won't Turn Away" opens the album with an enlivening dose of jangling, Byrds-inflected indie pop, while the similarly buoyant "Hey Girl" calls to mind the melancholy-tinged melodicism of Pet Sounds-era Beach Boys. "The Reason We Sing" is an impossibly cheerful, yet suitably quirky, lo-fi take on late seventies new wave synth-pop, whereas the rollicking title track goes the route of gritty, Stones-derived swagger. And the best-of-album "Aysa" weds intricate, arpeggio-laden acoustic guitar work -- a la Jim Croce -- to sweeping orchestral flourishes to create a piece of sublime and stirring beauty.

Lyrically, the group complements its retro-inclined musical tastes with a fittingly direct and unassuming writing style. Indeed, the lion's share of the Never Felt release comes delivered refreshingly minus the usual obtuseness and irony that are fast becoming stock-in-trade for the seemingly countless number of artists clamoring to establish indie and alternative credibility. But, if songs like "Into the Light" and "Everybody's Waiting" ("If we keep ourselves occupied / It won't be long / Until the trumpets in the sky / Play our song") sound as if they could pass for lost artifacts from the late early '70s Jesus Music movement, they, along with the rest of the tracks on the record, simultaneously exude a certain timelessness that positions them very much in the present day.

While portions of the group's lyrics might come across as trite or cloying in the hands of other writers, the overarching sincerity with which The Billions' collective delivers its themes transforms the band's sunny, forthright lyrical bent into a distinguishing factor of sorts. And if some of the foursome's musical influences are quoted a bit literally at times, the group nevertheless instils each of the entries on the new record, regardless of whose catalog they happen to be borrowing from at the time, with a heartfelt innocence and exuberance that that seem bound to win over even the most cynical of listeners. Even as it draws from so many sources that are so familiar to so many, the Never Felt This Way Before release manages to be one of the most unique and refreshing offerings to come down the pop/rock pike in a long time. An absolutely stellar effort.