The Legend of Simon Peter - The Blackstones (2005) 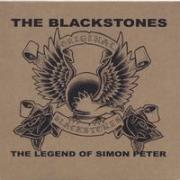 After five and a half years of musical exploration as The Tremolo Cowboys, The Blackstones rupture the scene with a genuine rock collection. Working with a maturity not often felt in independent acts, these musicians hold a smartness that could have only come from their years of performing with groups like The Violet Burning and The Rock and Roll Worship Circus. Just as these bands incorporate worshipful moments into their characteristic stellar rock sound, The Blackstones seek to break out of the clear-cut genres. While The Legend of Simon Peter won't be placed in the "worship" section of your local Christian bookstore (if it were to receive nation-wide distribution), distinct moments exist where listeners can't help but turn their eyes and hearts upward.

The album works the theme of Simon Peter throughout the melodies. The album's lyrical content reflects the initial call, the three years of ministry, the denial of Christ, the return to Christ, and the upper room empowerment and commission. Aaron LaMere calls Peter "the comeback kid of the Bible," the underdog in whom we may each find hope.

Having heard their tour roster, and knowing LaMere's little brother plays drums for RRWC, I lazily expected the sound to be similar, almost redundant. But to my surprise, I was completely wrong. You'd be hard pressed to believe that these boys hail from the same Washington coast; the twelve songs feel as if they were birthed in the heart of the Midwest. Simon Peter becomes a "good-ol' boy" (a genuine "comeback kid" from the West), croaking along to tunes like "Saved," a country-rock anthem of God's redemptive power. LaMere's gritty vocals, combined with the clean-driving guitars reminiscent of Third Day's Brad Avery, The Elms' Thom Daugherty, and Tom Petty and the Heartbreakers' Mike Campbell, provides a perfect music picture. "Favorite Tune" continues the country theme by introducing a roaring harmonica. If The Blackstones intended to make a classic rock record, they have found success.

This isn't to say that there's no room for quiet reflection. Heavy reverb coats LaMere's vocals on "How Can I Live?" A lone electric guitar accompanies the repentant cries of a Peter who has denied his Christ. After this comes "The Day Without End," the most similar to RRWC in style and meditative contemplation — almost comparable to "The Undiscovered," only more subtle. The guitar solo interlude creates a space for worship much like "The Undiscovered," but with a gentler feel. This is the lazy sway, the solitary prayer-time on the shores of the Jordan. "Come Back" serves as good middle ground, with soothing acoustic guitars and a smooth drum rhythm. Nearing the end of the CD, it becomes a superior concluding track.

I don't see any faults in The Legend of Simon Peter. That might seem impossible, and a few months from now I might reread this review and wonder, "How could I even say that?" But I say it from the stand-point of the band's intentions. Every song carries its own weight, leading into the next track with both fluidity and energy. The Simon Peter theme remains strong, yet not domineering. The music is soothing, classic, and crisp. The lyrics keep the worshipful theme, yet they refuse to take away from the music. I can only imagine The Blackstone's live show; if it retains the musical caliber and worshipful heart, it cannot be anything but amazing.