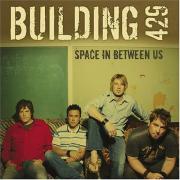 Right around the time last year that Building 429 was releasing its full-length debut, Space in Between Us, I was busy reviewing its predecessor, the Glory Defined EP. Since I wasn't overwhelmed with what I heard on the shorter version, I didn't hold out much hope for the full-length release. Now that I've taken some time to savor the flavor of this disc, though, I can honestly say... that I haven't been disappointed. The problems that I noted in my earlier review are still present; in particular, they still sound like a band doing an album of covers. Unfortunately for the listener, the longer album-length run time just compounds the problem.

It's probably not all the fault of the band's members. They've only been together for a few years, and it's a little difficult to develop a signature sound when you're still getting to know the other guys. Add to that the pressure to rush into production on a CD that comes immediately after signing a record deal, and some of the shortcomings are forgivable. The good news in all of this is that the guys show a lot of potential. Front man Jason Roy has a wonderful voice, powerful without being overwhelming and raspy (in a good way). His Southern drawl comes through at times as well, adding further uniqueness to his presentation. The songwriting is smart throughout. The lyrics are well-thought out, consistently showing a Christ-centered focus.

Those who read my review of the EP will recall that I thought a song called "Free" was the best of that project. I really expected to see it included on the follow-up. To my disappointment, it did not make the cut. I thought the odds were pretty good with only five songs on the EP, but three other songs were carried over to the album. In addition to the title track, reappearing here are radio smash-hit "Glory Defined" and "Show You Love." Other tracks of noteworthiness include the power-ballad-ish "Shadow of Angels," true ballad "No One Knows" and "Never Look Away." It's hardly surprising that these songs are sequential, given that they all fall in the heart of the project, just when the listening really picks up. Somewhat of a shock, though, is the clunker that follows after "Angeline." It has the feel of a hair-band power-ballad, and though it tells the story of an actress losing herself in the materialism of Hollywood, the moral of the story gets somewhat lost in the alternating "good" of the chorus and the "bad" of the stanzas.

There are some good individual songs on this project, but the problems far outweigh the successes. Not to mention the fact that listening straight through tends to blend all the songs into each other, yielding an indistinct mass of "everything sounds the same." Jason's go-it-alone vocals are tremendous, but overall there is a certain "oomph" that seems to be missing. Too often the passion of a "Glory Defined" is supplanted by a lackadaisical effort like "Angeline." Even though this is the full-length debut for the band, I'm hoping that its position following Glory Defined gets the "sophomore slump" out of the way early so these guys can get down to business. They have the talent glimmering just beneath the surface; I can see it. Let's see some of these problems are addressed in future endeavors.