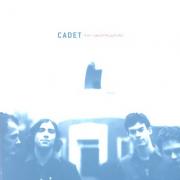 Elvis, the Beatles, Led Zeppelin, Nirvana. All of them rock stars, all of them pioneers that have contributed to developing rock music. A more striking similarity is the content of their music. Though the styles are vastly different and the lyrics vary in degrees of vulgarity/rebellion, there is a running theme of teenage thought. These musicians, whether they were crooning about love, decrying the authorities, dreaming about sex, or raging about the point of life, all reflected the underlying worldview of their teenage fans. When you put all these factors together, they create a dark lens that presents a discolored view of life.

Christian rock bands often follow in these footsteps, with the one exception being that they take up a different lens, one that paints a picture of hope and trust in God. Cadet's sophomore release, The Observatory, is no exception. Complete with the themes of authority, love, and the point of life, Cadet has crafted a collection of songs that doesn't really have anything new to say. Rather, the attraction lies in the variety with which they present their message.

While Cadet does present some good songs that display genuine innovation, half of the CD is fairly derivative. Employing the popular power rock ballad (a la Creed or Nickelback) works for some songs ("Nobody"; "Two Stars") but flops on others ("Change My Name"). Combining old-fashioned rock sense with punk rock energy also has mixed results: "Blame" and "Call Me" don't do much to excite, but "Stuck in a Song" achieves an entertaining package. A distinct Counting Crows influence is heard on "Wishing Well," but Cadet pulls it off well enough to make the song worthwhile. The lyrics are similarly middle-of-the-road. Though they avoid the regular clichés, there are few lines that will stick in your head because of their originality (the best line is, without a doubt, from "Wishing Well": "Yeah, Counting Crows are on the radio ~ But no one ever heard from Mr. Jones"). Furthermore, the subject matter isn't anything you haven't heard before. One third of the songs are about personal change, another third are about lost love, and the other third are about helping friends. In all, it's a decent album, but not one that will knock your socks off.

In the end, it's hard to completely condemn this CD. No, it won't stun you with musical or lyrical creativity. No, it doesn't have that extra mile that separates the "good" from the "great." However, it does have what most teen rock fans want: songs that you can sing along to. It also has what Christian parents of teen rock fans want: lyrics that you won't mind hearing your teenage child singing. And you know what? That's not such a bad thing.