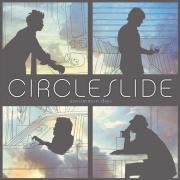 You have to hand it to Gabe Martinez and his cohorts in Circleslide. It takes no small amount of moxie to name a band after one of the most revered albums in Christian alternative music — that, of course, being the Choir's pioneering 1990 release of the same title. To their credit, the Circleslide foursome can cite five years of tireless touring, a first place finish at 2003's Music in the Rockies contest and uniformly glowing praise from those in the indie crowd (the ultimate badge of honor for many a rock-oriented group) among their list of accomplishments. Equally impressively, the quartet managed to pull in founding Choir members Steve Hindalong and Derri Daugherty, along with current Choir songwriter/guitarist Marc Byrd, to handle production and engineering chores for their full-length debut.

Achievements and accolades notwithstanding, the Circleslide namesake seems destined to invite comparisons between Martinez's band and all things Choir-related. And, to be fair, a good portion of Uncommon Days does bear the imprint of its support staff. Lyrics like "I'm running up the merciful road" ("Home") and "C'mon, c'mon / Don't cry, Love / It's alright" ("The Weather Boy") reflect Hindalong's distinctly understated poetic inclinations. The terse, ominous bassline on "The Weather Boy" (a tongue-in-cheek nod to Hindalong and Daugherty's "Weather Girl," perhaps?) calls to mind the dark, unsettling undercurrent of the Choir's "Sled Dog." Martinez's breathy, slightly husky vocals on the title track invoke those of Byrd with his former band, Common Children. And the prominent organic percussion work on "Up to the Sky" is vintage Hindalong.

If Uncommon Days featured only the aforementioned songs, it would still have been an engaging, well-performed acknowledgment to Martinez's heroes. As it stands, though, the Circleslide collective tackles a decidedly diverse set of outside influences without ever breaking stride. "Walking On The Waves" is an effervescent fusion of modern rock and sunny 60's pop. "Noah," by comparison, offers up a tenacious slab of arena-ready rock along the lines of classic, '80s-era U2. Martinez ties "Up To The Sky," the sweeping, semi-theatrical "Possession" and the Gen-X-movie-theme-ready "Soul" together with his best Richard Marx impersonation which, despite its unlikely source, works magnificently. And his raucous, menacing delivery on "The Weather Boy" would have done Jim Morrison proud.

The band's passion occasionally takes the them a bit over the top, lyrically, as it does on cuts like "Up to the Sky" ("Windows of broken glass / Filled with aristocrats") and "Soul" ("And they build the wall / And the sirens call / Lonely dream dying out on the road"). And the preponderance of Choir-tinged material might tempt some to brand the Circleslide cooperative as merely a tribute band. For the most part, though, Gabe and brother Tim instill their songs with an above-average literacy, honesty and insight. And one should keep in mind that, if it really were that easy to mimic Daugherty and Hindalong convincingly, far more groups would be doing it.

Influences and similarities aside, the true test of any album is its material. And, on that count, Uncommon Days succeed marvelously. From introspective ballads and tender worship pieces to all-out rockers, Martinez and his fellows pull each off convincingly. And even though Days is undeniably eclectic, its songs are similar enough in spirit to lend it an underlying sense of unity. To be sure, few releases this varied play out so cohesively. Melding gritty, heartfelt vocals, towering choruses and infectious melody lines — all of the things that make the pop/rock format truly great — into a glorious whole, the Circleslide four-piece has arguably earned the rights to its much-revered moniker.