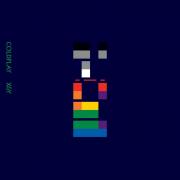 All of a sudden Coldplay has hit the scene with radiant force. Could it be blamed on a rush of blood to the head (either the album or the actual state)? Perhaps it's a mixture of both. From online news sources to glossy magazine spreads, the media moguls are calling Coldplay "the next U2." Only time will tell whether or not this claim is valid. For now, we have the third studio release from one of the most popular bands on the planet.

X&Y maintains Coldplay's high caliber of downright good songwriting. Every song feels huge thanks to layers of piano, guitars, drums and vocals. Each track is radio-friendly and would create the perfect music video or hit song for a movie soundtrack. Coldplay is a marketing guru's best dream.

But that's not to limit or demean their art in any respect. They have a universal appeal (as universal as a rock band can get) through their mantra of simplicity. It may not be a mantra they subscribe to, but it's heard everywhere—in the repeating lead-guitar hooks, the steady drumbeats, the uncomplicated melody lines, and the down-to-earth lyrics. It's poetry for the common man.

Another strength to X&Y is the ethereal, almost spiritual nature to the songs. They produce a reflective calm that allows listeners to ponder larger-than-life themes such as love, the sound barrier, time, outer space, risk-taking, and healing. Songs like "What If" address the fear of rejection not only from other humans, but also from the natural elements, with questions like, "What if there was no time?" What if things were turned upside down? What if I hand you my heart and you shatter it? But Martin believes the risk needs to be taken.

"Fix You" continues the risk theme, with lines like, "But if you never try you'll never know." It's a song of failure and redemption (or at least an attempt at redemption): "Lights will guide you home / And ignite your bones / And I will try to fix you." It's not that restoration immediately follows, but that a solution will try to be found. True healing cannot be guaranteed.

Thus the fear present in "Talk," with lines line, "I'm so scared about the future / And I want to talk to you." The dream of a better day bleeds across the album, with pleas of, "How long do I have to climb up the side of this mountain of mine?" ("Speed of Sound"). "A Message" declares that we don't have to exist in isolation, and it includes a type of father's cry to a prodigal son: "I love you, please come home." In "The Hardest Part," Martin sings, "And I wish that I could work it out," "it" being the intricate patterns of life. And yet in working it out on one's own, it almost goes against the theme in "A Message."

X&Y acknowledges ignorance, fear, and desperation. Each song includes desires to repair the maimed and correct the wrong. But the solutions remain non-existent. As a band, Coldplay has enough wisdom to realize that restitution does not lie within us. Instead we find ourselves "drifting into outer space," without a sense of direction or a finality of purpose ("X&Y"). If nothing else, X&Y typifies the frightened child of this generation. We've been told, "You're in control / Is there anywhere you want to go?" ("Square One"), and in being handed an endless passport, we find ourselves lost in the largest space ever created: our heart. It's just like what Martin sings, "It doesn't matter who you are" ("Square One"). We all want someone to listen to us, to love us, to look upon us and call us worthy of attention.

I don't see it as coincidence that Coldplay is as popular as they are. They speak to the haunting loneliness existent in us all, and X&Y paints an accurate picture of that lonliness.