August and Everything After - Counting Crows (1993) 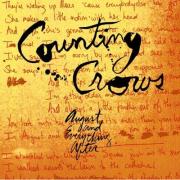 It's always hard as a "music critic" (a term with which, like it or not, most of us around here will be labelled) to review an album that one has become enamoured with. It's easy (and probably most fun) to review a bad album, and equally simple to appraise a banal piece of "art," but really good ones—the kind that transport you to another place and leave you wanting more—can be the scourge of any critic's existence.

August and Everything After, a modern day classic, is one of those albums. Driven by Adam Duritz's poetry and vocals and given substance by one of the most eclectic (the instruments used on this album range from mandolins to accordions to harmonicas) instrumentalists this side of the Dave Matthews Band.

This album has spawned some of the most recognizable and sophisticate alt. singles of the 90's, including "A Murder of One," "Rain King," "Round Here" and the infamous "Mr. Jones." Thing is, though, it's hard to find a track on this album that isn't likeable.

"Omaha," which follows the brooding opening cut, "Round Here," is a rootsy, mid-tempo ballad, whose message can be summed up by one stray line in the chorus--"It's the heart that matters more." "Perfect Blue Buildings," "Anna Begins" and every song that follows them are as notable and gratifying as the songs that made it to secular radio. Sonically, there are few albums as pleasing as this.

There are some lyrical gaffes, though, that should caution some listeners.

In "Round Here," a woman seduces the singer just before she suggests that she's "close to understanding Jesus." Another character in the song admits to being "tired of life" and contemplates suicide. Duritz, the lyricist, apparently offers no help to the latter, saying only "she must be tired of something."

In "Mr. Jones," Duritz seeks fulfillment in celebrity ("When I look at the television, I want to see me staring right back at me...when everybody loves me, I'm going to be just about as happy as I can be").

"Perfect Blue Buildings" he seems to negate that desire, as yearns for the opposite of fame, saying "Gonna get me a little oblivion." But Duritz later cynically points to life as meaningless. He drifts further into depression, singing, "Beneath the dust and love and sweat that hangs on everybody/There's a dead man trying to get out."

"Anna Begins" paints with vivid detail a complicated love story (the downside: the relationship is adulterous).

"Rain King," which comes two songs later, is a thoroughly enjoyable ditty, but reveals Duritz's weird interpretation of what heaven will be like ("When I think of heaven/I think of flying down into a sea of pens and feathers and all other instruments of faith and sex and God in the belly of a black-winged bird"). He also admits to drowning his sorrows in alcohol.

In "A Murder of One," Duritz derides a young woman for no apparent reason: "All your life is such a shame...Open up your eyes/You can see the flames/Of your wasted life/You should be ashamed."

This album won't lift you up (and, though thoroughly derivative, Jars of Clay's If I Left the Zoo is an excellent, positive alternative), but has value in copious amounts. Duritz writes with a thoroughly honest and open approach, and gives the listener an intimate look at his own struggles. Listeners can find encouragement in knowing that not everybody has it all figured out.

Save for a few gaffes, August is definitely worth your while.