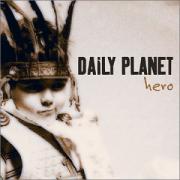 Daily Planet wants to be your hero, baby. Oh yeah. But the problem is that four guys who don't know the definition of "rock music" can hardly save the Christian music industry from collapsing. If anything, their music could be defined as "funk contemporary." That's right, contemporary. Daily Planet comes so close to sounding like your parents in a band that it's not even funny. Ok, well maybe it is, as we can't resist snickering at the guys for shouting random stuff like "Rock!" and "Uh-huh" throughout the course of their album. Speaking of the album, Hero received a lot of hype from DP's label, Reunion Records, but does it all pay off? The answer is an emphatic "no."

Before I go any further, let me say that my opinion of Daily Planet is not entirely negative. As people, they're great guys. They have a sound ministry, specifically to the hurting, and their album deals with themes such as divorce, questioning God, and the responsibilities of being role-models. As songwriters, they manage to squeeze a couple of decent tracks onto the record. One is "Six-String Rocketeer," Jesse Butterworth's story of how he escaped tension at home when his parents would fight. Sadly, they ended up in divorce, but Jesse remembers how he'd pull out his songbooks, pick up his "beat-up guitar," and blast off to wherever his soul could find peace. The tender guitar chords during this song make it all the more touching. Another one you may want to sample is "3000 Miles Away," an acoustic, Chicago-flavored ballad with a slight groove to keep things from moving too slowly. It's also one of the few songs where Butterworth's vocals are tolerable as he takes even the highest notes gracefully. From the lyrics it's obvious that this track was penned for a significant other ("Your absence changes me and everything seems so wrong, but with no sense of irony I write you this sweet love song"), and it's perfect for couples in long distance relationships, i.e. myself when I'm at college. The electric organ tops off the ensemble perfectly.

As a rock band, Daily Planet falls short, plain and simple. Other than the aforementioned two songs, the rest of their lyrics are elementary and their rhyme schemes childish. Check out the verse in "More to Life" that says "This chimpanzee won't let me be, camped on my back," or the one during "Hero" that reads "I read the bio to see what you're all about...let's put it this way folks, this guy is no boy scout." Even worse, "Five" conjures up images of Seth Davis in Superman underoos, which we neither want to see nor hear about. Kind of makes you wonder which audience the band is trying to appeal to. Their musical spectrum falls somewhere just beyond adult contemporary realm, and the tracks that they actually try to rock out on end up sounding overdone. For instance, the disc's fourth cut, "Tangled Web," mixes some synthesizers and dark, unnatural electric guitar distortion in an attempt to sound edgy, but instead evolves into a semi-southern jam even Third Day would reject. "Five" is all about living life to the fullest, but its sound doesn't vary much from "Hero," and you'll find yourself wondering if you're accidentally listening to the same song over again. The conclusion of "More to Life" gets drawn out for what seems like an eternity, spanning about two minutes of impromptu string wailing and Jesse Butterworth occasionally kicking in a scream or two. "I Live" is nothing more than another mediocre modern worship song. It builds some momentum during the chorus, but it's still paced much too slow to expect anything grand from. In fact, Hero is devoid of nearly any articulate or beautiful artistry; most songs simply repeat the same message over and over until it's beat into the ground. And the single most annoying presence on DP's debut is the voice of Jesse Butterworth, hands-down. Credit is due him on rare instances like "3000 Miles Away," but elsewhere he emits about as much appeal as a diseased moose. Other times he tries too hard, struggling to reach talent he lacks and ends up sounding even worse off than before.

Combining these elements caused me to overlook the minor positives of Daily Planet and Hero. Bad lyrics...bad vocals...bad musicianship...the foursome simply lacks the experience and talent required to be a rock band, especially in the Christian circuit. Their music could be found appealing to younger audiences (5-10) or some adults, but the truth is these guys have put excessive effort into this debut, almost like they're trying to be someone else. Heroes they are not. I hate to rail on any artist and/or group of artists unless it's necessary, but if Daily Planet is where Clark Kent works, he should pack his suitcase and submit his resumé elsewhere.

Lessons in life? Never trust Reunion with labeling someone a "rock" band.