B Collision: The Eschatology of Bluegrass - David Crowder Band (2006) 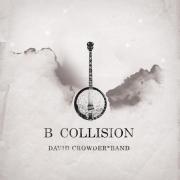 If youâ€™ve read any of my reviews for this band, youâ€™ll know that I always seem to study their work, because Iâ€™m always yelling, â€œOoh, ooh, Iâ€™ll take DCB! Let me at it!â€ I sported a similar attitude with this recording... that is until Mr. Dan Ficker let me know that this remix record was bluegrass in style.

But I took a stab at the CD nonetheless. I like a fair bit of country, and Iâ€™ll listen to bluegrass if itâ€™s ever in close proximity; how bad could this album be?

If the David Crowder Band had never made a remix album, I might be more lenient with this most recent experimentation. However, this is not the first remix to cross our plates, and I canâ€™t help but imagine that B Collision was probably recorded to make more money for Sparrow Records.

The opening track, â€œIâ€™ve Had Enough,â€ isnâ€™t so bad, but thatâ€™s because itâ€™s a new song, so the acoustic guitar feel seems more natural, more signature-DCB. â€œWholly Yoursâ€ carries a similar feel; the opening guitar work is identical to the version on the bandâ€™s most recent studio project, A Collision, and the song doesnâ€™t deviate much from that initial recording.

So then I asked myself, â€œIf youâ€™re not going to change the song at all, why stick it on a remix album?â€ If a song is going to stay the same, minus a few electric guitars and rock drums, whatâ€™s the point? Oh wait, you want to earn some cash on the side. Alright then.

The song that makes me want to throw this CD across the room is the full-length version of â€œEverybody Wants to Go to Heaven.â€ The lyrical snippet that appeared in random places on A Collision was hilarious; Crowder sang high-pitched, almost franticly, â€œEverybody wants to go to heaven / But nobody wants to die!â€ This version, however, is too serious, too boring, and much too long. Itâ€™s monotonous, even when techno instruments come in.

And then I think, â€œOkay, itâ€™s obvious you like techno, but I suppose it would really look like a marketing ploy if you made another Sunsets and Sushi, so you had to do bluegrass.â€ â€œI Can Hear the Angels Singingâ€ reinforces this assumption, for it showcases singing Macintoshes (you know, the Mac voice that can read text? That voice sings parts of this tune). This technique isnâ€™t new; Iâ€™ve heard several other bands take advantage of computer vocal chords.

Then comes the last two songs, recorded in Kansas with the Robbie Seay Band and Shane & Shane. Once again, theyâ€™re almost the same as the versions on the album, only this time theyâ€™re live, and include more musicians. Not even the fact that I like Shane & Shane could save these last two tracks for me.

Iâ€™ll be honest; Iâ€™m only listening to this CD now because I need to review it. After this text is written down, Iâ€™m placing B Collision as far away from me as possible.

Too harsh, I imagine. I can see all you Southern Americans, bluegrass washing through your veins, raising your fists in defiance. â€œYou Yankees just donâ€™t understand!â€ you scream. And I suppose thatâ€™s true. I probably donâ€™t understand. Perhaps I need to lighten up.

But you see, I really enjoy this band. I love what David Crowder and his band members have done to create new songs. My interest in their music makes my dislike of this album all the more painful.

So, if youâ€™ve never heard anything by the David Crowder Band, do not use this album to determine whether or not youâ€™ll enjoy them. And, if youâ€™re a die-hard fan, and youâ€™re reading this and making faces, calling me â€œstupidâ€ in your headâ€¦ youâ€™re more of a fan than I am, so I give you mad props. B Collision carries a bit too much twang for this city girl to chew.