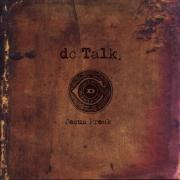 Toby McKeehan, Michael Tait, and Kevin Max finally "unrapped" themselves back in 1995 when they released what would soon be the best known album in the Christian music industry, Jesus Freak. Five years later, the album has been certified a platinum status and is quickly on its way to double platinum. To the delight of most fans, dc Talk was able to change their sound without changing their style throughout the 13 tracks on this release, as the early rap-core title cut proves. Probably the most popular song in Christian music, "Jesus Freak," drew in listeners with its awesome blend of rock and a hard-hitting message. Who can forget the ever-so-addicting lyrics, "What will people think when they hear that I'm a Jesus Freak? What will people do when they find out its true? I don't really care if they label me a Jesus Freak, there ain't no disguising the truth."

Of course the title cut was the most significant reason to buy the album, as the survey on www.dctalk.com proves, but the song "Jesus Freak" didn't sell an entire 1.5 million copies by itself. The rest of the CD had a lot more to offer, from the mellow, laid-back sounds of "Colored People" (a song about racial tension) and "Day by Day" to the high octane "So Help Me God" and "Like It, Love It, Need It." "Day by Day" and "So Help Me God" both deal with asking God for strength and faith when the devil attacks, and "Like It, Love It, Need It" talks about earthly things and material possessions providing temporary happiness, but how only Jesus provides everlasting joy. The mainstream radio hit "Between You and Me" is also included on the album, which is what helped dc Talk draw so many fans from the secular crowd. Popular worship tunes "What If I Stumble?" and "In the Light" contribute to the success of the album as well, while "What Have We Become?" takes a look at the human race from a different point of view, asking us, "Where did we go wrong?" Finally, "Mind's Eye" wraps up this milestone album with a message about faith and knowing that God exists even though we can't see Him physically. The point dc Talk stresses is that we see God in the way He works through us. The lyrics challenge, "Can you catch a wind? See a breeze? It's presence is revealed by the leaves on a tree. An image of my faith in the unseen." The remainder of goodies on Jesus Freak are mostly just fun little sound clips that dcT included for a good laugh (check out the "Jesus Freak" reprise with the lounge singer!). There is one more track hidden at the end of the album following the brief musical interlude after "Mind's Eye," consisting of a poem written by Kevin Max entitled "Alas My Love." It's accompanied by some beautiful string music that is unusual for a dc Talk album.

All in all, Jesus Freak is an album symbolizing the evolution of dc Talk from 1989 to what they have become today, and a journey through faith and what it means to walk the Christian walk. The change that has taken place in the group since then is evident, not only in their music, but through their message. Jesus Freak is incredible proof of a growing spiritual maturity throughout the members of dc Talk.

If you don't own a copy of Jesus Freak, then what are you waiting on? Run, do not walk, to your local Christian bookstore and pick it up. Help make this album reach a double platinum status and use it as a witness to your lost friends who haven't yet become Jesus Freaks!