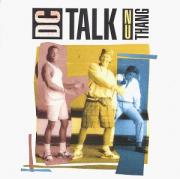 Take a moment and imagine you're in the early 90's. Better yet, just take a look at the Nu Thang CD cover. You're entering an age of brightly colored clothing, of puffy hair, of men wearing fanny-packs over sweatshirts... well, ok, maybe that's just Toby Mac. At any rate, Nu Thang is from a different period of musical history. As such, it really only appeals to two groups of people: fans of the corny, synthesized sound of early 90's pop or hardcore DC Talk fans like yours truly. As the group's second CD, Nu Thang shows definite purpose and budding potential and it marks a unique point in DC Talk's growth. Although not refined enough to have gained much recognition, it served as a platform for their future fame and success.

Toby Mac's rapping is the core of the album, and considering he wrote every song, this comes as no surprise. What may be surprising is the difference in sound between this and his current, more urban style in Momentum. Unlike later DC Talk hits, Nu Thang is more like laid-back rap with a pop feel (think Fresh Prince). Also in contrast to the later DCT days are Michael Tait's and Kevin Max's lesser roles in the CD. Although Tait's strong voice and Kevin's distinctive vibrato carry the chorus, their overall contribution is less significant than what their fans have come to expect.

Corny slang abounds in every song, which can get annoying at times. Nevertheless, some of it is so purposefully comical that you can't help but laugh. Take, for example, this little intermission from "No More":

The CD's other potential flaws are musical simplicity and a tendency to lecture. Musically, drums are the backbone of the CD. This is to be expected for a rap CD, though the final product is a tad monotonous as a result. Also, although DC Talk is known for their strong, Christian stances on certain issues, this CD is significantly more "preachy" than their others. Examples of this are found in the opinionated "Children Can Live," which takes a stand against abortion, and in "Talk it Out," which pushes inter-family communication.

"Things of This World" is the CD's most powerful song. Kevin delivers a haunting chorus that blends well with Toby's more serious rap, and a round between Kevin and Michael at the end of the song creates a nice ending harmony. The lyrics are surprisingly slang-free as they warn against the waste of a lifetime on materialistic things. Musically, a bass, subtle chorus and light percussion support the simple melody. While the track is not overly interesting from a musical perspective, its message is sure to linger long after the song is over.

"Walls" is the only song credited in part to Michael Tait, and it leans towards DC Talk's later rock sound. In fighting racism, it also introduces the prevailing theme of racial acceptance that thrives in DC Talk's music. Audio clips from Martin Luther King Jr. add weight to the song, giving it staying power that allowed it to become a part of the Jesus Freak tour much later on.

In the life of DC Talk, Nu Thang was an awkward growing stage. The band was stretching its musical and spiritual legs, developing experience and a union that would serve them well into their later years. But even before they reached full maturity, DC Talk was starting to do a "new thing" in the lives of their fans-an impact that, for me, continues today.