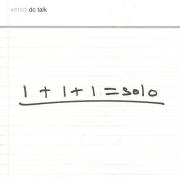 Fans pore over even their most obscure performances, commonplace remarks, and trivial nuances. Critics believe that the three guys have piggybacked on studio musicians and producers to get where they are as Christian music's first superstars (and wearing that label comfortably). Whichever side of the debate one's on, the choice of each dc talk member to go Solo holds much promise. With three upcoming albums instead of the usual one, the dct message boards gush with excitement--while the calculating commentators await the chance to pick apart which member can't write, sing, etc. Solo, a 27-minute EP, previews Michael's jam sessions, Kevin's crafty rock operas, and Toby's sharp hip-hop, beginning with the mutual effort "Forty," recorded live. This U2 cover elucidates what their legions of zealots revere: an ability to praise, muse, and parade all in the same song. Under the rock influence of Pete Stewart, the band Tait exercises in two routines: a blaring concentration of guitar, and inhibited, radio gloss-over. The former is "Alibi," the latter "All You Got," both heavy on lead singer and namesake Michael Tait. "MahHmmm-myha...." Kmax swaggers in with a round of vocal warm-ups, throwing off popular, same-sounding forms...almost. Bass/drums/guitar still dominate, and the stereotypical "Be" squanders a good opportunity. Yet "Return of the Singer" outstrips Kevin's past sonic expeditions, barraging one's mental lobe with images of lunar touch-down, microphone thrust, and nitty-gritty truth. tobyMac breaks up Solo's fragmented feel, presenting the R&B-flavored "Somebody's Watching Me" as the first of two solid raps. Phat bass notes, an all-female backup, and a persistent beat mask verses that take jabs at the dc talk breakup rumors: "People want to know is there life after 'talk'...that junk's creeping into my solo joint." And, the finale, "Extreme Days." Industrial rap-core, attitude-heavy rock, white rap you can mosh to: call it whatever, this chaotic nucleus revolves around God and His raging reality. Only seven songs, Solo tantalizes listeners with an appetizer sampler of styles sure to spawn vast innovations in CCM.