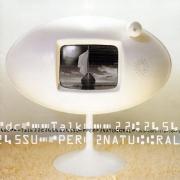 What to expect from a group that has consistently refocused their sound from their rap inception to their 1,245,000-selling Jesus Freak? Obviously something unexpected, new, different, and beyond the limits of today's Christian music ~ something Supernatural. indeed the sound, songs, message, style and poetry presented here will please all dc Talk fans, except those into rap, as the guys have thankfully cut it from this release. with 14 tracks, theres a lot to cover here, but it all comes down to this: Toby McKeehan, Michael Tait and Kevin Max have wrapped a more real, clearer gospel message in an advanced framework of alternative grooves, pop tunes, and some really original rock. Michael Tait's "soul" element is displayed throughout this release in soaring vocals and funk groove, and especially on "Wanna Be Loved." Poet Kevin Max, whose last name he legally changed from Smith, has got some really interesting, deep, meaningful lyrics on this record. from the title track ("Beyond this physical terrain / There's an invisible domain / Where angels battle over souls in vast array / But down on earth is where I am / No wings to fly, no place to stand / Here on my knees, I am a stranger in this land") to the voice over closer "There is a Treason at Sea," from the dare-to-be-different "Dive" to the ska extravaganza "Since I Met You," dc Talk's real faith plays front and center. The two spelled-out-in-so-many-words gospel messages are "Into Jesus," which talks of the freedom and meaning found in a Christ-filled life, and "Red Letters," a passionate piano ballad (or was until the bridge). other highlights include "GodSend" and "The Truth," which was submitted for the X-Files movie soundtrack. Let me stress that this is not an Amy Grant record in that God and Jesus are never mentioned ~ dc Talk doesn't feel pressured to tone down their message just because they're popular in the secular realm. Proof of this is that the week of September 22, Supernatural debuted at #4 on the Billboard charts. This is a real witness to the ministry of Christian music...and even more so to the incredible impact that three guys making "decent Christian" Talk can have on a hopeless, hurting world.