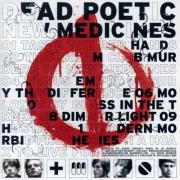 While some might scoff at the idea of the sophomore slump, the challenges involved in following a highly successful first album are very real. Some groups turn out a carbon copy of the debut which almost inevitably pales next to its predecessor. Others purposely run as far afield of the opening effort as possible, only to lose the better part of their fan base in the process. For New Medicines, the follow-up to the critically-lauded Four Wall Blackmail project, the members of Dead Poetic have opted to do a bit of both.

The growled vocals and unrelenting energy of the barreling leadoff track, "Taste the Red Hands," are part and parcel with those on the Blackmail record. The bleak, introspective lyrical bent of cuts such as "Molotov" ("So light it up and let it fly away / A Molotov Cocktail / My dreams symbolized in flames") is likewise reminiscent of the freshman outing. That said, the better portion of the new album finds the group moving away from the screamo and hardcore aesthetic of the first record and making a surprisingly convincing foray into the more melodic, guitar-driven hard rock domain of artists like Anberlin, SR-71 and The Foo Fighters. The band also expands its musical palette a bit this time around, tackling emo ("Dimmer Light"), garage rock ("A Hoax to Live For") and even what might loosely be considered power pop ("Vanus Empty") with similarly impressive results.

Connoisseurs of the more melodic, pop-friendly strains of rock may find portions of the new record a bit faceless, lacking memorable hooks or melodies. Likewise, those who appreciated the hardcore leanings of the first effort may be put off by the Poetic collective's migration into kinder, gentler musical territory. In fairness, though, vocalist Brandon Rike and his bandmates get the pop/hard rock equation right far more often than not. And Medicines's relatively softer textures allow for a greater appreciation of Rike's sturdy, fluid singing voice and his band's skillful musical interplay. If the new project plays a bit less cohesively as a whole than Four Wall Blackmail, its diversity points to a group talented enough to take on a fairly broad range of musical styles and pull each of them off convincingly, making New Medicines an even more interesting and accomplished venture than its impressive forerunner.