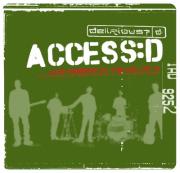 Delirious? has long been the heavyweight champion of rock, let alone rock with a spiritual theme. In my opinion they're the only band that holds a chance of meeting the level of U2. The music industry as a whole would be at an extreme loss if these five English boys had never decided to invest years into making songs. Their influence spans nations, bringing aggressive guitars, passionate lyrics, and bold vocals into the limelight.

Delirious? has had success with two live recordings in the past (d:tour Live 1997 and Live and in the Can), but now listeners can access the culmination of the band's best for the new millennium. After watching the band perform, after feeling yourself washed in the current of electric sound, you understand just how much Delirious? was intended to be a live band. Their energy explodes on this two-disk compilation, Access:d. This is required listening material for anyone who has fallen in love with songs like "History Maker," "Deeper," and the every-popular "I Could Sing of Your Love Forever." Twenty songs comprise the collection, including spur of the moment melodies that come to the band in every concert.

One of those moments that made me fall in love with the album was track eight on disk one, "Rain Down." Martin Smith's shouts dissolve to the background, and Tim Jupp fingers an absolutely gorgeous piano moment, almost lullaby-ish in nature. Martin sings a call for God's rain to descend upon His church ("We are thirsty for Your rain / Deep calls to deep / We're singing rain down"), and the single piano notes descend the scale like a light drizzle-the beginnings of a deeper storm. Martin sings, as always, with sincerity, passion, and beauty to the ear. It invokes such a sense of peace and wonder in the listener. It's a true moment of worship as Martin cries for God's presence. My only complaint was that the moment felt too rushed. I could have remained on "Rain Down" for another 5 minutes at least. In fact, several other songs moved on too quickly for my taste.

Perhaps that's the problem of a band like Delirious?. When they make a compilation album, even two disks cannot contain an adequate serving of their diversity. Several highlights include "Happy Song" a classic from the early 90s. It leaves the country feel it held on Cutting Edge and turns into an almost-punk rendition. I enjoy the new version so much more than the original. When Martin tells this crowd, "This song is not sad. It's very happy," Stu G turns on the overdrive and Stewart Smith attacks the drum set. And of course, the screaming crowd sings along, but they sing along with every song. That's the charm of a live recording.

Another highlight is "King of Fools," for it is sung entirely by Stu G. What sounds like a steel guitar and an acoustic accompanies his vocals. The crowd yells along as Stu sings slightly flat, but it's delightful just the same, because it's Stu G. The man whose vocal solo sat in the middle of "Heaven" now has his own song to sing: "I'll live for You / and I'll try to be the king of fools."

I must mention just a few more songs. "Jesus Blood" is quieter than the two original recordings, allowing the synthesizer and audience to shine, and "Hang on to You" still ranks higher than the Luna Halo version. And while I enjoy track twelve on disk two, "Dance in the River," it's almost identical to the version on Passion: Our Love is Loud. I have to wonder who copied whom.

But the band redeems themselves by ending the journey with "Investigate," the new "Obsession." Stu G absolutely shines on this song, playing licks that could cause even Eric Clapton to take notice. Martin and the crowd sing, "Fly away / I'll never be the same." I love how the collection ends on a song calling for God to investigate the lives of His children, to "shine upon the darkest plac" of our souls, and before the lengthy (yet not lengthy enough) guitar solo, Martin screams "Fire!" a call for God's consuming fire to descend. First there was the rain to wash; now the fire to burn arrives.

Unlike other compilation CDs, these disks can be enjoyed separately from each other; they each stand as their own creation. I highly recommend Access:d, for it showcases the band's heart for intimate worship and top-of-the-line music, a marriage much needed in the industry.