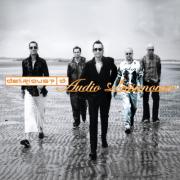 Music redefined? Whoever heard of such nonsense? Surely it couldn't have happened...

Oh, but it has. Ever since Brit-boys Delirious? arrived on the scene they've managed to criss-cross the worship and rock genres unlike any Christian artists before them. As if we weren't already captivated, the band has enrolled in another music lesson; one that will redefine their music and the future of Delirious? themselves. Class is in session. It's time for an Audio Lessonover?

The upfront truth about this latest offering is that upon its U.S. release it is not likely to be well-received, which is a shame. If you dive in expecting anything similar to Glo or Mezzamorphis, prepare to be disappointed. As the record's title implies, this is totally untouched territory for the band. However, this new venture works out for the best, as AL?'s thirteen tracks are some of the most innovative and exciting music Delirious? has ever created. Need proof? Simply insert the disc into your CD player and be swept away by the tidal wave that is "Waiting For the Summer." Don't worry about lack of quality; Martin Smith's vocals and Stu G's guitar are as vibrant as ever, and the sunny performance by the rest of the band will immediately have listeners hooked. Roll over to "Take Me Away" and be immersed in the essence of British rock as Delirious? "takes you away" to a vivacious ballad singing the praises of love. Are you lost yet? Never fear, for "Love Is The Compass," and the needle always points toward God on this unhurried, Newsboys-like tune. The ingenuity of Stu G. radiates through "Alien," which begins with a steady pulse of rhythmic strumming and escalates into a downpour of extraterrestrial riffs towards the song's climax. Eventually the storm dies down, and Martin Smith, accompanied by a pleasurable piano solo, passionately sings about his "Angel In Disguise." The band soon picks up the slack as Smith acknowledges the love of his life that God sent to him, who because of her unconditional love and faithfulness takes on the form of a celestial being. The "angel" returns later on an equally similar ballad entitled "There Is An Angel." "Rollercoaster" then pulls listeners through a sleepy, dreamlike melody with a few twists and turns of its own, plummets into a musical sinkhole, and loops back around to where it started. "Freedom people make this sound" is d:'s call to arms on the high-octane worship anthem "Fire." Stewart Smith's thunderous percussion performance plays an important role here, and Stu G's blazing guitar links it all together as Martin blasts "I, I, I believe / that the fire is here today / I, I, I believe / now the smoke and the ice has blown away." Temporarily inheriting the spirit of the Beatles, "Bicycle Gasoline" glides along smoothly and exhibits Delirious? keeping true to their British roots, while in the early stages of "A Little Love" they masquerade as Pink Floyd. As soon as the somber lyrics and melody rapidly fade away, the boys break out with the unambiguous reminder that "all you need is love, just a little love, to bring us through." "Show Me Heaven" brings out the glam-ish, All Star United side of the band (no wonder ASU has been confirmed as support on the 2002 Fire Tour) complete with screeching guitars, a "Take it, Stu G." tag line, and a powerful unmatched guitar solo, at least on this album. Before the tragedy of 9/11 even occurred, d: had penned a beautiful, patriotic aria not only for "America," but for the rest of the world as well, proclaiming it "too young to die." After the traumatic events that took place on that fateful day, the band unselfishly decided to release the song for download on mp3.com, praying that it would offer hope and peace for those who suffered loss, and even for those who hadn't. It continues to fulfill its mission on Audio Lessonover?, pleading with listeners around the globe to "sing a new song." The final track finds Delirious? "Stealing Time" - as much as they possibly can. In fact, the tune hauntingly progresses for a near solid eight minutes with a chilling keyboard augmentation that sends shivers down your spine. Additionally, there's an abstract bonus track written and voiced by Garrard, "Making Art," hidden long after "Stealing Time" is finished. It also takes the form of a familiar Beatles' tune, but adds to the overall diversity of Audio Lessonover? and finishes it off on a humorous note.

While the theme of love is repetitive on AL?, there's no reason why any normal d: enthusiast should get bored with the CD. Remember, along with God's precious gift of love come the other blessings faith and hope, which abound in plenty throughout the disc as well. Furthermore, Audio Lessonover? is an album that is just as mainstream friendly as it is to the CHR market, so don't be surprised if the band scores some big hits in the secular realm. Keep in mind that just one brief spin in your CD player probably won't be enough to appreciate this release; subsequent listens provide more time to let the artistry sink in and allow a greater understanding of the disc as a whole. Once you do, you'll easily see why Delirious? has aced their latest music lesson.