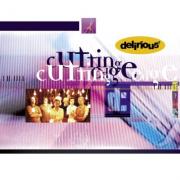 Youth For the Nations. Aldersgate. Brownsville Revival. Rock the Nations. The Almighty, Living GOD of the universe is pouring down revival that is changing lives. And a big tool He is using is the anointed songs of worship and adoration by songwriter Martin Smith, lead vocalist for the British band deliriou5? Their four demos recorded from 92-95, have just been remastered on a double CD set, Cutting Edge, a landmark recording that serves as a soundtrack to the move of God sweeping across the Atlantic from the British Isles. England has been historically known to be particularly reserved in worship--and then the biggest move of praise ever to hit comes from there. God is so Cool! Raw, tender, passionate, prophetic and inspired, Cutting Edge captures the ongoing struggle of daily surrendering every aspect of our lives to Christ. Disc 1 chronicles deliriou5?'s beginnings, and this quote from the extensive linear notes captures the essence of their existence then and now, "Although Martin was writing the material, we saw ourselves as a band - each member is leading worship, whether it be on drums, keyboards or guitars--and just like the words, the music was important." It's really surprising to see a band with such lyrical and musical depth right from their inception, as cuts like "Coming Back," "Prophet Song," and "Lead Me" hit you with Truth you'll be pondering for days. Though Disc Two is much preferred by fans, you'll find all the deliriou5? "standards" on disc one, including "The Happy Song," "Shout to the North," and "I Could Sing of Your Love Forever." The second disc displays a lyrical maturity and sensitivity to the Spirit unsurpassed by today's Hosanna! pop praise. The opener "Did You Feel?" is really THE anthem of our Lord's revival of worship that has occurred over the last few years--while "I've Found Jesus" celebrates the Son of God with a vibrant rock sound. Tender worship ballads ("Find Me in the River," "I've Searched for Gold") mix with all-out Rock declarations ("Louder Than the Radio," "I'm Not Ashamed") to form this experience of Heaven on earth. The alternative sound later full blown in King of Fools is sampled on the pounding single "Obsession," a masterpiece of pounding bass that rocks with deliriou5? energy. On Cutting Edge, this lyrical quote rings true: "Can't you hear the sound that's rising ~ From all the corners of the earth?...Don't you hear the praise? ~ It's louder than the radio."