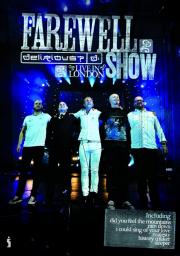 Over the years, delirious? have done a number of live concert videos.  The first, A View From The Terraces, was a VHS-only release in the UK that later appeared on the archive:d DVD release.  It was much later in their career when Now Is The Time was recorded in Chicago and just last year My Soul Sings was released.  These DVDs were great quality, but the songs featured were mostly the band's newest material and the classic favorites were not well-represented.  Thankfully, Farewell Show is a beautiful recording of the band's last show on DVD that includes some of the new as well as plenty of the old.

To kick off the show, the band shows up on stage but behind a large curtain.  Lights from behind the band project silhouettes of them on the curtain and the crowd begins to cheer.  After lead singer Martin Smith sings the chorus of "All This Time", the lights start flashing, guitarist Stu G starts jammin', and the curtain falls.  "Bliss" is a fitting opener to the show and uses the band's impressive stage setup to full effect.  The stage features a video projection screen above the LED video wall that's become standard at today's arena concerts.  The video screen for "Bliss" features a new video retrospective of the band that also shows up on the DVD's intro briefly.  Ohh, and did I mention that there were green lasers fanning out across the stage and over the audience?  Yeah, this show is a visual tour de force.

On more recent worship-oriented songs such as "Solid Rock", "Rain Down" and "Paint the Town Red", the band has been using videos that display the lyrics along with delirious? playing the song.  One of the most poignant moments of "Solid Rock" is Martin passionately singing the bridge into a megaphone and the DVD video heightens it with a grainy, black-and-white presentation.  Later in the show, Martin Smith gives the megaphone to a member of the audience saying that "I don't need it anymore" and enjoining him to "rally the troops" with it.

The delirious? guys instantaneously make a costume change and begin "Sanctify" from their King of Fools album in the same number 5 football (Americans read: soccer) jerseys as the video from one of their earliest big concerts at the Wembley stadium plays on the video screen.  The classic songs continue with the pounding of "Obsession," where the whole stage is awash in red light and the atmospheric wail of guitars.  The only live section on the DVD that is not on the 2CD set is a beautiful medley of "Jesus's Blood" and "King or Cripple" that includes the chorus of a pop song called "True Colours" as well.

"Rain Down" features many great shots of the London crowd jumping up and down and singing in unison as well as large portions of the crowd singing the song with all they've got.  Another classic favorite, "Deeper", gets such a loud crowd response on the first verse that Martin stops singing and lets the crowd lead the vocals.  Also, the producers/editors have fun cutting the camera angles pretty fast and switching between black and white and full color video for an energizing effect.  In "Paint the Town Red", the wives of the band members come out on stage to run in place as a symbol of working hard to take the world for Christ.

Martin asks the audience to "sing their hearts out" on "Majesty (Here I Am)" as some weird black and white shapes move about on the video screen and slowly clarify to become silhouettes of people worshipping.  Martin continues to conduct the beautiful chorus of participants in this consecrated worship song and, for a couple minutes, one of Martin's daughters rides piggy-back on her dad as he sings center stage.  After a short chorus of "Our God Reigns", the video gets grainy and black-and-white while Martin welcomes former drummer, Stewart Smith, to drum alongside current drummer, Paul Evans.  Having two drummers on "Investigate", one of delirious?'s most epic and unique songs, only makes it more intense.  As only delirious? can do, the music reaches a fever pitch but remains worshipful as Martin yells, "Fly away!"  Truly, "Investigate" is a song that has to be experienced live to be fully understood, much like "Obsession" before it.  The band briefly leaves the stage after a quick bow.

The boys of delirious? return to the stage in white overcoats and begin possibly their most iconic song, "History Maker", a powerful declaration of wanting to change the world for Christ.  The video screen displays the song's lyrics as headlines in newspapers.  During the bridge, Martin explains that they've done all this to encourage their many fans, quoting the Latin phrase, "Fabula est vestri" ("The story is yours"), their tagline for their final tour.  During this song, the audience is well-lit, raising their hands, and passionately singing along to every word.  The band begins to say their goodbyes to the crowd and most are visibly choked up, but they get back into place for one final song.  After Martin thanks their wives for "their years of sacrifice", the dulcet guitar tones of "My Soul Sings" and Martin thanks the crowd again.  Both the band an the crowd end this era with the chorus, "My soul sings / Hallelujah," as the screen is filled with small pulsating dots of light and the lasers fill the room.  In the end, the band takes a bow and exits the stage for the last time.  It's a beautiful ending to an amazing 17 years of making music around the world.

Included in the bonus features is a 35-minute pre-concert where the band calls themselves "The Cutting Edge Band", which is the informal name given to them the first couple years of playing together for a youth worship event.  The video intro includes a bunch of photos and the audio from the opening of Live & In The Can and then starts with "Not Ashamed".  The band completes the informal, "school hall" look with striped and plaid shirts and even a cap or two.  Bassist Jon Thatcher even hams it up by covering his head with a bushy, brown wig and keyboardist Tim Jupp's keyboard is in a case that makes it look like an old, wooden upright piano.  The Cutting Edge band is only playing on the front half of the stage with a curtain behind them and keep the lighting pretty plain with mostly white lights.  Favorites such as "The Happy Song" and snippets of "Shout To The North" and "I Could Sing of Your Love Forever" are played to an enthusiastic audience.  Songs that have not been played at shows in a decade or more include "Thank You For Saving Me/White Ribbon Day" and "Find Me In The River".  "Did You Feel The Mountains Tremble" finishes up the set and Martin Smith invites all the children of delirious? to come out and "dance in the river" as the band has done at many concerts before.  This nostalgic set is something that longtime fans such as myself consider worth the price of the DVD alone.

Finally, included on the DVD is a 26-minute behind-the scenes documentary of their last tour of England.  The feature is a nice little collection of backstage, travel and studio footage from mostly their final month of touring but also includes a bit of clips from their last year of touring worldwide.  Most of the documentary is interviews with the band and crew looking back on the past 17 years as well as just setting up for a big concert production such as this.  One thing I noted from this footage was that the band didn't play the same set every night; they mixed up both the new and old songs.  It's great to find a band who has the ability to do that.

All of the features on this DVD are presented in 16:9 Anamorphic widescreen and are some of the best quality concert footage I've ever seen on DVD.  Due to the space limitations of the DVD format, though, it seems there is a bit more video compression on the Cutting Edge show than the main program.  The audio of both the Cutting Edge concert and the main concert is available in Dolby Stereo and DTS 5.1 Surround.  The stereo version sounds fantastic.  Unfortunately, I do not have the technology to adequately evaluate the 5.1 mix to see how it improves on the stereo version.  (Maybe someday I will update this review to include such information.)  I think it's safe to say that no expense was spared to make this as good of a home presentation as possible.

No matter if you're a longtime delirious? fan or a newcomer, this DVD will be a heartwarming experience for all.  After watching this disc a couple times, there's no doubt that this is the quintessential delirious? concert.  The two hours of performances on this disc span the entire 17 years of the band's career and include some of their most intense moments of rock and worship.