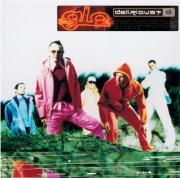 Back when Martin Smith was scared of crowds, before Stu G. groupies hounded them, and "delirious" was another term for being intoxicated, a few British guys made a decision: they'd rock hard in leading worship, but a flashy show wouldn't ever replace the presence of God. Eight years later, the d:boys bring that same naive vision to Glo, forming a new paradigm of congregational song. The holy crusade begins with "God You Are My God," a parade of globalism that interfuses the Ampleforth Abbey Monks, Mart's contagious improv, the 150-strong d-fans crowd, solid guitar support via Stu G. and Co., and the proper British interruptions of Anna Smith. Utterly smitten, "God's Romance" clatters with a "heartbeat for holiness" in Glo's most rock-out cut. A wispy, fluid melody bows to the all-knowing, still-caring Lord of life, asking Him to "Investigate" the recesses of our uncleanness. "What Would I Have Done?" is a precursor to an array of awakening called "My Glorious." Guitar comes in torrents; melody and countermelody unfold with adapting quickness; the choir assemblage render a magnanimous repeat of the chorus line. The combined volume and shock of "My Glorious" is such that some would call it "unnecessary and wasteful," like Mary's anointing of Jesus' feet. Their disposition is undimmed in track eight, a streamlined pop song that runs proud for the Lord has enriched us with "Everything." Fickle yet synchronized, the delirious? mix of "Hang On to You" tops Luna Halo's version by basing it on striking production and well-timed rock outbreaks--as the lyrics hallow God's bright beauty. A full seven and a half minutes, "Intimate Stranger" beholds "the Saviour whose death made all things new," ever lost in the most concealed, untold presence of the Almighty. "Awaken the Dawn" brings back another long-gone d:ay. Months prior to plugging into the delirious? thing, veteran guitarist Stuart Garrard recorded with the Spring Harvest praise team, including the splendorous tune overhauled here as a bigger 'circa 2000` anthem. Disproving all sell-out accusations, "The Years Go By" stands astonished at "the One who keeps it true" and His leading over the course of the d:boys lives and careers. Re-attired with new DJ tweaks and a flurry of violin passages, tracks 14-15 ("Jesus' Blood") gush with exaltation, and uniquely assess how Glo is the same, but different, than Mezzamorphis. No longer do they pack up their own equipment every night, or pass the mic around like a hot potato--yet the divine foretaste, the undisguised heart cry remains. Glo is more than just delirious? uncensored--it's the defining apex of the new millennium.