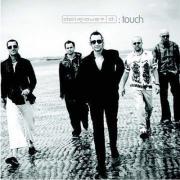 A heat-sensitive cover. Remixes and re-recordings. Cuts and additions. A bonus enhanced CD. Hate 'em or love 'em, you've got to hand it to the fab five from Littlehampton: they sure know how to put together an irresistible package.

But beauty is, as they say, only skin-deep. Once you've finished playing with the trendy cardboard cover and staring at the European fashions that grace the album art, you're going to excitedly place Touch in your CD player, and then comes the crucial moment. Does it bring elation or disappointment?

For the casual d:fan who didn't bother importing Audio Lessonover?, Touch will be an exciting piece of North American d:history. After the regurgitation of Deeper, Touch is a breath of fresh air, bringing new life and excitement into the ordinary Christian rock fan. I would argue that the rock Delirious? has to present is less than wondrous these days, and certainly not trend-setting. Still, for anyone who is looking for enjoyable rock music, Touch has its merits: namely, it’s good for moshing and it's British.

But we can't stay in this vein of things: most d:fans are aware that Audio Lessonover? is vastly different than Touch, so they won't really care to hear the songs described again. After all, the question of the hour is (or at least, should be): did we get ripped off? And though my answer is likely to brand me a heretic, I'm going to go ahead and say it anyway. Yes, you did get ripped off.

Touch is so gimmick-laden that it shouts "money grab" from the get-go. Besides the heat-sensitive cover (which is both useless and cumbersome), there are many other things which raise questions in my mind. For starters, why was it necessary to cut four songs from Audio Lessonover? Two of them ("A Little Love" and "America") were AL?’s weaker moments, so d: could be forgiven for eliminating them. Yet, "There is an Angel" and "Bicycle Gasoline" were two gems that shone with their poetic lyrics and unique musicality. In the end, Touch begins to look like sunshine covered by clouds: dull.

That dullness grows when you take into account the two remixes. "Love is the Compass," though it's fundamentally unchanged, becomes heavier with the increase of keyboards and lack of guitar; "Waiting for the Summer" is positively perverted as the jangly summer guitar is replaced by atmospheric sounds that make you wonder if they long for a summer in Siberia.

The biggest mistake, however, is the inclusion of the title track. Whereas the Roaring Lambs version grabbed you with its electrifying rawness, this latest incarnation has the feel of an old shirt that has been kept from the trash can way too long. Martin's vocals waver all over the place, not content to stay within their suitable boundaries, and the guitar parts, though creative, fail to inspire in any way.

So, there you have it: my attempt to persuade you to skip this album and spend your money on something else, preferably something more inventive and unique. Fact is, Delirious? seem to have slipped into a rut where they can simply adapt to new fashions rather than creating new styles. As an old d:fan, it saddens me to see the band that was once my prize and joy become something I can toss out without guilt. Maybe I'm just growing. Only time will tell.