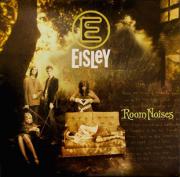 I first heard of Eisley (back when they called themselves Moss Eisley) on a dark, humid night in Dallas, TX. I was enchanted immediately, especially by the haunting plea found in "Telescope Eyes." Even on the flight home several days later, the chorus of "Please don't make me cry / I'm just like you, I know you know / I'm just like you, so leave me alone" rang through my brain like a loose school bell. This was the music of recess during young school days, and an aura of innocence covered the siblings and childhood friend while they were on stage. Now, three years later, the children's storybook feel remains like the brisk smell of freshly cut grass. The room noises one hears in this album are ones of childhood, of young love, and of a modern Alice dancing through her Wonderland.

What draws me into this dream world is the vocal work of sisters Sherri and Stacy DuPree. Their harmonies are such that one spends time listening to how they phrase their vowels rather than trying to hear the words. It takes a little bit to grow accustomed to the somewhat nasal vocal style the sisters embrace. But once I realized the style complimented the fairy-tale environment, the project grew on me, much like the "mermaid-entwined shrubbery" mentioned in "Marvelous Things." The music itself is quite normal when compared to the vocals. The only instruments that really invoke a dreamy place are the light keyboards on songs like "Telescope Eyes" and the slide guitar on "Golly Sandra." The vocals themselves remain the real crux of this band.

The lyrics captured my heart next, because they read more like postmodern poetry than modern rock love songs. "I Wasn't Prepared" talks of bees wrapping themselves around the speaker, "and that's when I spoke a word to have them trace your face for me in pollen." "Marvelous Things" describes "horses growing out the lawn." In "Brightly Wound" we see the declaration, "I shall never grow up / Make believe is much too fun / Can we go far away to the humming meadow?" This desire to remain child-like does not mean they embrace naïveté. Songs like "Plenty of Paper" and "One Day I Slowly Floated Away" take a musical and lyrical turn into nightmares. There's talk of the land "of men and machines," a place where "identical hands" do our every bidding ("Plenty of Paper"). A sense of death exists in lines like, "Our bodies are growing thin" ("One Day I Slowly Faded Away").

Overall, Room Noises remains an album of lullabies — the musical version of Hans Christian Anderson, where anything is possible. After listening to this album, I'm delighted to see the young musicians still residing in a place of dream. Their innocence is a delightful change from the ever-present realism found on most other recordings.