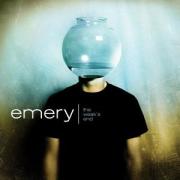 It's probably safe to say that more than a few budding musicians secretly hold the notion that the life of the average rock and roll artist is nothing but first-class travel, legions of adoring fans and an instant and endless flow of income. Of course, those most familiar with the music business can tell you that, for every band that hits the big time, there are probably ten more groups whose day-to-day experience revolves around fast food, substandard lodging and playing to near-empty houses.

The aforementioned truth, it would seem, is hardly lost on the members of Emery. After college, the South Carolina six-piece relocated to Seattle, where it played locally for two years. During this time, the group received an invitation to tour the west coast with another relatively unknown band. Quitting their jobs and moving into a motor home fashioned from an old racecar trailer, the sextet headed out on the road. As it turns out, the group returned from the tour penniless and unemployed, with only a cramped trailer with three bunk beds and a small bathroom in which to live.

That said, it would appear that there is, indeed, some truth to the adage that "those things that don't kill you will make you stronger." To be sure, the group's major-label debut, The Weak's End, is nothing if not tenacious. The impressive leadoff cut, "Walls," bursts from its starting gate with a salvo of frenzied guitars, lumbering bass lines and vocals that shift seamlessly between sweetly languishing and nearly unhinged. The riff-heavy "Disguising Mistakes with Goodbyes" is a likewise animated slice of musicianship destined to foster legions of aspiring air guitarists. And the best-of-album "Bloodless" functions as a veritable storehouse of blistering fret board runs, razor-sharp start/stop dynamics and a host of other guitar-related delights.

In all fairness, portions of the album are a bit musically nondescript. And the band's fondness for alternately sung and screamed vocals edges them perilously close to overfamiliar territory. But, unlike the ever-growing number of artists who ostensibly employ the soft-to-loud aesthetic only for irony's sake, the members of the Emery collective appear to feel both sides of the subdued/passionate coin equally and deeply. And while this first record admittedly falls just shy of groundbreaking, it nonetheless stands as an admirable and encouraging first step towards greater things. Indeed, with an imposing musical proficiency, refreshing authenticity and tangible sense of enthusiasm between them, one can't help but feel that, for the lads of Emery, The Weak's End is only the beginning.