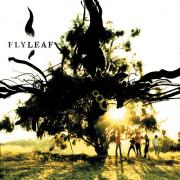 My sister is one of those girls who would seriously frighten me if she weren't a Christian. She encapsulates everything punk, everything rock, everything rebellious and alternative. Recently she called me into her room to tell me about this band "where the lead singer screams" (something quite common with the music she enjoys). But I paused when I hear a girl's voice. "Yeah, the girl screams!" said my sister with wide eyes and a large smile. So now I sat to listen. This isn't the neighborhood brat girl releasing a whiny scream about a lost toy. One measure Lacey Mosley is almost cooing the notes, light and airy, and then she explodes with a rough, guttural roar. It's the equivalent of Eisley going hardcore. Flyleaf enters the music scene with a solid band and a strong vocal front woman.

The strength of their four-song EP lies in the song "Breathe Today." It opens with ambient guitars and vocals and then kicks into gear with Mosley singing the verses in rap-rock fashion. The guitars follow a basic power-chord pattern right in step with the drums. The melodic bridge sounds vaguely familiar to Skillet's work on Collide, and it leads into one of Mosley's trademark screams. The song beckons the nonbeliever to turn to Christ, to begin breathing: "You can breathe today / So many lies swirling around you / You're suffocating / The ending shaping you steals your breath / You're suffocating." It's a solid combination of vocals, music, and lyrical composition.

"Breathe Today" has a good rock foundation, but it isn't as heavy as "Cassie," which documents the Columbine shooting. The screamed mantra "I will say yes" launches the song into distorted guitar and bass. According to this track, the Christians who died for believing in God arranged their own death: "And Cassie pulled the trigger / And Rachel pulled the trigger / And I will pull the trigger." While the theme itself is a bit dated, it's a good reminder of the chaos that took place in American suburbia—a chaos that could occur again. It causes listeners to consider how they would react in such a situation.

"Red Sam" takes the melodic strength of "Breathe Today," the heaviness of "Cassie," and molds them together into a solid initial track. Mosley sings, "Here I stand, empty hands / Wishing my wrists were bleeding / To stop the pain from the beatings and / There You stood, holding me / Waiting for me to notice you / But who are You / You are the truth / I'm dreaming these lies / You are the truth / Saving my life." It's a realization of God's omnipresence in the midst of every moment of life. In a climatic point of surrender, Mosley screams, "and I worship You." God is praised in the midst of the pain. "Red Sam" delivers hope through an appropriate medium of thrashing music.

If this EP holds any indication to the future of Flyleaf, they're due for unparalleled success. While the music is similar to many of the bands my sister listens to, the female vocals plant this band within their own unique mold. I can sense areas that need musical and lyrical growth, but there is an undeniable potential within these young musicians. I, along with my hardcore sister, look forward to their full-length debut with much anticipation.