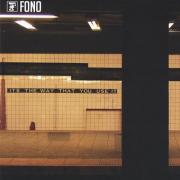 While most artists in the music world navigate their share of changing fortune over the course of a career, Del Currie and his bandmates in Fono have experienced higher highs and lower lows than most. Shortly after forming in 1996, Currie, drummer Andy Ridley and bassist Ian Crawford put together a demo recording. The demo garnered the threesome, who had yet to even perform live together, an unlikely first gig opening for Bon Jovi before a crowd of 50,000 people in the group's hometown of Milton Keynes, England. The band's 1999 debut, goesaroundcomesaround, went on to net the trio a 30 minute special on the BBC, Best Unsigned Band honors from the world-famous Kerrang! Magazine, and opening slots for everyone from Tonic and the Goo Goo Dolls to rock icon Robert Plant.

In early 2002, Currie and Ridley, weary of constant travel between Europe and the US, relocated to California and enlisted Americans Soren Engen (guitar) and Cindy Milliman (bass) for work on the follow-up. By October of 2003, work on the second album was completed and master recordings were carried to the band's studio in San Diego for safekeeping. The next morning, the studio — along with the group's instruments, equipment and computers, which contained the tracks for the new record — was burned to the ground by wildfires that swept through Southern California. Undaunted, the quartet relocated to a new studio in February of 2004 and completed the sophomore project in time for an early November release, nearly a year to the day from the date of the fire.

From the opening strains of It's the Way that You Use It, one can tell that Currie still favors Bono-esque vocal inflections and slightly oblique language. The band, likewise, continues to adhere fairly closely to the U2-meets-the-Goo-Goo-Dolls template laid out on the first release. This time around, though, Currie and his mates have traded a good bit of their raucous hard rock for more subtle fare. Guitar textures are lighter and airier; rhythms are more subdued; and melody lines a bit more meandering than those of the freshman outing. In the same way, the better portion of the sophomore effort carries with it a certain feeling of restraint, as compared to its forerunner which pretty much ran at full throttle from start to finish.

Wordwise, the band is still seeking to make the grand statement. The problem here, as with the first album, is that phrases like "Have you found the secret island / Somewhere you can hide away" ("Sunlight Silence") and "The night and the ultraviolet shines / It takes your heart and puts it all on show" ("Headlights") sound far deeper and more important than they really are. Where the musical portion of goesaroundcomesaround largely made up for its occasional lyrical lapses, the new project lacks the debut's infectious energy and attention to hook and melody, which only works to pull its word-related deficiencies into that much sharper focus. Indeed, it is perhaps telling that the strongest cut on It's the Way... is an acoustic remake of "Alcatraz" from the first release.

Of course, the fact that the new project pales in comparison to its predecessor is certainly understandable in light of the circumstances surrounding its creation. And, truth be told, most up-and-coming artists would be glad to have their names attached to a record as respectable as this one. That said, newcomers to the band will still be best served by picking up the inaugural effort. Existing fans are likewise advised to approach the latest release for what it is — a listenable, if unexceptional, offering from a band in the midst of rebuilding. Both parties, though, can look expectantly towards the third album which, one hopes, will herald a welcome return to form for the tenacious Fono fold.