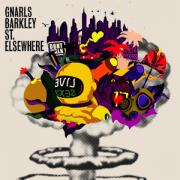 This was going to be a story about the death of hip-hop. That's not what it has become, but let's dwell on the point for a moment anyway and acknowledge that the writing is on the wall. Since the schizoid rift between the impeccably talented halves of Outkast, urban music has been headed in an unpleasant direction: away from its roots.

The success of Andre3000's "Hey Ya," ushered in a series of attempts by rappers of many stripes to spit rhymes melodically rather than a-tonally. Spoken word had become too commonplace, too predictable. To put it as journalist Scoop Jackson might, suckas think they can sing.

This isn't a story about the death of hip-hop, however. This is a story about insanity. Because as much as St. Elsewhere, the debut disc from Gnarls Barkley, contributes to the death of hip-hop, it is also an inescapably manic piece of work. Yes, the most striking thing about an album from one-time rapper Cee-lo and beat genius Danger Mouse, is that there is hardly anything hip-hop about it. But the second is just how weird, tangential and psychotic it is.

Take these lines from "Transformer," for instance: "I'm just being myself/Plus I gotta be me too/Silly of me to think that/I couldn't bring myself to be you/Ah but behold there is benevolence/Behind this but don't stare though/Be careful 'cause I'll kill you/With kindness."

And then "Who Cares," where Cee-lo sings, "Basically, I'm complicated... I wouldn't call it schizophrenia/But I'll be at least two people/Today."

"Just a Thought" includes open confessions of severe depression ("It's dark even in the daytime") and suicidal thinking. Mentioning the popular single "Crazy" ("I remember whenâ€¦I lost my mind/There was something so pleasant about that place") bolsters the diagnosis without need for elaboration.

The instrumental elements of the album are, to some degree, less bonkers and more straightforward. Danger Mouse is experimental to a point, as when he injects the tweet of a lifeguard's whistle into staccato trumpet riffs and crashing cymbals in "Go-Go Gadget Gospel." His work on several other cuts, however â€“ "Crazy," "Gone Daddy Gone," and "Smiley Faces," for example â€“ is conventional to the point that it's almost forgettable.

Although it's these songs â€“ the more accessible, less exploratory ones â€“ that are the album's best, the weirdness displayed here is pleasant up to a point. Like an indigent street philosopher, Cee-lo occasionally spits out simple-but-profound statements ("You see everybody is somebody/But nobody wants to be themselves") and in truth his lyrics make much more sense than I've led you to believe. His poetry is odd but coherent for the most part; there are simply moments that make you wonder if he's playing with a full deck of cards.

The track "Online," a transparent ode to cocaine use, makes one wonder if the madness isÂ unnaturally induced, and is one reason younger listeners should stay away from this album. A mild profanity appears in "Transformer," and "Necromancer" is nothing short of despicable if it is taken literally. This is somewhat odd, given the Biblically-saturated "Go-Go-Gadget Gospel" and the Christ-like spirit of statements like this, one, from "Crazy": "My heroes had the heart to lose their lives out on the limb."

It's not a stretch to suggest that Cee-lo really is as dichotomous and delirious as he claims to be. The rift between his two personas is almost as remarkable as that which has severed Outkast, and that which threatens to ruin hip-hop forever. In the end, St. Elsewhere is an admirably avante-guard album that eschews any attempt to label it. Different for difference's sake isn't always good, but it is in this case.

Gnarls Barkley is a weird whirlwind of an act, but the mix is a loveable one. Consumers older than 18 should give it a chance.