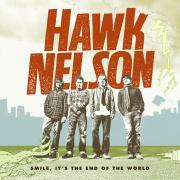 I'd seen Hawk Nelson play a high school here in Ottawa in 2002 or thereabouts on the strength of their introductory independent EP, and remembered their name when the Tooth & Nail signing was announced. But it wasn't til my burgeoning radio career took off that I realized two things about them: a) they're better than I'd given them credit for and b) they're valuable additions to the canons of Canadian content, something not to scoff at in the Great White North.