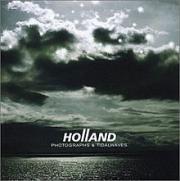 Will and Josiah Holland would probably be the first to tell you that life has been anything but static as of late. After two years of playing together under the Somerset moniker, the Texas-born siblings, along with friend Tim Watts, have packed up and moved to Nashville, dropped the Somerset tag and replaced it with the brothers' surname and inked a record deal with Tooth & Nail for their major-label debut.

Tossing in bits of power pop, emo and grunge, Photographs & Tidalwaves fits in nicely alongside the melodic alternative pop/rock of artists like Denison Marrs, The Foo Fighters and The Elms. The driving, exhortative verses and soaring chorus of the album-opening "The Whole World" lock together seamlessly for an irresistible slice of tune-driven pop. The equally stellar "I'm Not Backing Down" replicates the feat by virtue of its gritty, start-stop rhythms and infectiously lilting melody line. And "Shoot Like Stars" highlights the threesome's extraordinary skill at constructing that which is, at once, rousingly energetic and intricately beautiful.

The trio shines equally brightly on the lyrical side of the coin. Tracks like "The Whole World" and "One Minute to Zero" ("One minute to zero / And I'm laying down the law / One minute to zero / And this is my final call") are taken to the proverbial next level by the trio's skillful use of parallelism and repetition. Others, such as "Call It a Day" ("I've jumped the gun again / I've lost my only friend / To the hands that make the stars / And that draw me closer") illustrate a similarly impressive understanding of the correlation between the person-to-person and person-to-God relationships.

In fairness, some entries are musically stronger than others and the group's lyrics occasionally come across as a bit more routine than inspired. That said, such lapses are far more the exception than the rule. And even at its weakest points, Photographs is buoyed by an accessibility and enthusiasm that seem destined to convert even the most stolid of skeptics. Here's hoping that the wait for the second album turns out to be a short one.