Soundtrack to a Revolution - The Insyderz (2003) 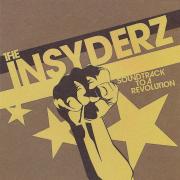 Trumpets, cornets, and trombones are not common to today's music. They are instruments more acquainted with the big-band sounds of the early twentieth century than the modern rock and rap music. However, The Insyderz have been able to incorporate these instruments into melodies that have managed to stay atop the Christian charts for years. After spending years with their families, the Insyderz are back with Soundtrack to a Revolution. At times, the Insyderz sound like they're stuck in the early days, but at other moments they display that they are still in touch with today's teenagers.

The music on this CD is varied. There are the horn-driven songs such as "Call to Arms" and the title track. The whole concept of "Call to Arms" is for Christians to live their faith fully. Unfortunately, it isn't one of the best; the chorus of "this is a call to arms / prepare for war" is harsh and annoying after the first 10 times it's sung. The beginning is mellow and musically respectable, but after that, it goes downhill. In comparison, "Soundtrack" is a much more commendable song. It is more listenable than "Call to Arms" and is a lot less harsh on the ears. "Soundtrack…" lacks the blaring horns and is the enjoyable sounds resonate throughout the piece.

The disc even has a song that is more on the hardcore rap side that mirrors the sounds of Thousand Foot Krutch, Kid Rock, and The O.C Supertones all mixed together. "The Shootout" refers to Detroit's music scene: "Kid Rock, Slim Shady and those wicked clowns / Are the ones bringing hits / with the Detroit sound / But when you dig deep enough hit the underground / You see some other brother's rocking / Tearing up this town." It is a cute little ditty, but after the backlash of the whole KJ-52 debacle, The Insyderz might want to watch out for repercussions as well.

"Shame on Me" is a more simplistic song and gentle to the ears. It highlights the vocals of Joe Yerke (formally of the Suicide Machines). Incorporating the concept presented in the title track, it ends the CD with something for the listener to think about: "When will I realize / this revolution is more than just these songs."

Soundtrack to a Revolution is well written, for the most part, but does not expand at all on The Insyderz' previous releases. It is at least worth a second spin. Give it that much, and if you can still not get into in, do not feel too upset; I didn't either. Those who are strong Insyderz supporters and ska lovers will appreciate it for the reverberation. It is a great example of the "cookie-cutter ska sound" The Insyderz have been putting out since the very beginning.