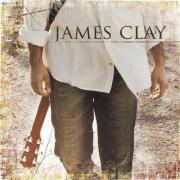 James Clay doesn't sound like a 22-year-old. His gritty, soulful voice sings of wisdom beyond his age. However, this worship leader, husband and father of two has lived enough to fill a few lifetimes. Growing up in poverty, Clay had to support his mother and siblings at the age of 14. He began to make sense of his life with an $80 dollar guitar. Less than ten years later, Clay is a new artist on Inpop Records, and his self-titled debut album reveals the spiritual and musical maturity that can only come from knowing the faithfulness of God.