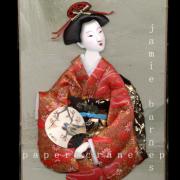 I've tried to buy an Iron and Wine CD on several occasions. Yet each time, I read something in the lyrics that discourages me, because it's something I don't wish to have playing through my mind. Of course, I can always buy individual tracks, but I'm still a child of the "˜90s"”still delighted and dazzled by an entire CD in physical form.

For folk artist Jamie Barnes, I'll make an exception to my silly rule. He cites Iron and Wine as an influence, but he's strived for his own voice and chosen to write lyrics that edify the soul. His newest project is a five-song EP"”a free download from his Myspace page. It's the first taste I've taken of Jamie's work, and it leaves me salivating for more. I could complain and say this project is too short, but I'll just have to purchase a few of his full-length projects to satisfy my craving for more music.

The Paper Crane EP is an illuminating movement, much like light traversing through clouds in a sunrise and sunset. "Paper Crane," the first track, unfolds like that sunrise with Oriental-ish flutes and synthesizers, and one can detect the man-made mimicking of cranes within the noises. It is water-like and quite ethereal. This dissolves into the background, and an acoustic guitar, played in arpeggio style, becomes the forefront instrument. Jamie sings in soft baritone, "When I folded both my wings down / It's only "˜cause it felt right / I felt compelled to let the world go / Only "˜cause it felt right / I had to lick my fingers clean / Smashed in the gears of the God-machine / As the days roll." It's a song ringing with humility, and both the lyrics and music showcase it perfectly. In letting go, in releasing control, one realizes they are "as thin as a paper crane / Laying face down in a storm drain."

"You Can't Go Wrong" sounds more traditional in form; the synthesizer is gone, the beat has picked up, and a banjo mimics the guitars. Light piano enters in the second verse, adding a bit of diversity, as is the case with each song here. The expected is turned sideways with the introduction of another instrument. This song also sounds more hopeful, even with the image of "a solider without fingers in the line of fire." In the midst of the uncertainties of life, "if the Good Lord's on your side / Then you can't go wrong." Of all these songs, I can picture this one plucked on a large Southern porch in the dying summer heat. To a Southern-California city girl like myself, this sounds ideal.

"Devil at Our Heels" returns to the melancholy of "Paper Crane," and Jamie sings off and on in smooth falsetto. It's a charming blend of guitars, piano, and vocals, and its lyrical style is more story-like. One can gather snippets of the story in lines like, "It was a Christmas filled with hospital bills but little daylight." For such a morose song, it contains one of the most beautiful instrumental breaks I have ever heard.

The almost too simplistic tune, "Patient Lover Be," is composed to his wife. Light bells, strong harmonies, and clacking castanets bring the song to a higher level than the stripped-down introduction would suggest. Then comes the short concluding track, "Wings On The Line." The harmonies and banjo return, along with a piano descending the scales"”serving as a fitting sunset. The album begins stronger than it ends, but there are enough moments in the latter half to keep the listener intrigued.

Even if I had never heard of Iron and Wine, The Paper Crane EP reflects enough beauty to keep me interested. Every listen reveals a new layer of creation. As an independent artist, Jamie Barnes has gained some decent exposure, and I expect to hear more and more from this musician.