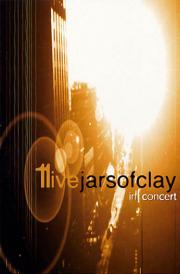 The DVD is the latest craze in home entertainment. It boasts higher video quality than VHS, support for multiple audio tracks, and, finally, no rewinding before you give it back to Blockbuster. But not many bands have used DVD yet, especially in Christian circles. However, Jars of Clay is one band that stays on the trend, getting their DVD out before it becomes hard to find VHS' of your favorite movies at your local store. The band themselves uses cutting edge technology in home DVD authoring to deliver 11ive, which includes a full-featured concert and so much more. And, yes, this proves that the Jars still have not lost their edge, especially when they are on stage.

The disc opens right away with the main feature, the concert. The boys introduce themselves amidst a montage of clips from the show while "I'm Alright" plays in the background. The strings of the "Crazy Times" bridge brings a short intro to the show with the guys backstage, getting "ready to rock." Although the crowd at this point had never heard songs from their current disc, The Eleventh Hour, the band opened with "Disappear," garnering somewhat of a response from the crowd. They really struck a chord with the audience on their next track, "Like A Child." Lead singer Dan Haseltine had fun jumping around the stage during the extended jam to close the song. The trio of string players brought a much fuller sound to much of Jars' material, including this one. As "iwanttoknowwhy" flashed on the video screen, the opening of "Unforgetful You" was played, complete with Dan on accordion and funkier keyboard effects on the bridge. Their only song from the amazing Much Afraid disc, "Crazy Times" rocked probably the most of the night's set, including lots of jumping and the signature guitar solo from Matt Odmark. A backstage interlude includes a bunch of silly remarks from the band, keeping it light. Jumping right back into the music, "Collide" was next, including a more prominent electric guitar part. Featuring excellent harmonies and prominent keyboards via Charlie Lowell, "Love Song for a Savior" brings back more of the old times when they did not use electric guitars. Asking the audience to sing out, it quickly turned into a quiet time of worship. Rambling on about everything new (single, album, haircuts, toothbrushes, etc.) the Jars continue the worshipful tone with "I Need You." Introducing more new songs, Dan told the story behind "Fly," a romance between a couple, even though the woman is dying from cancer. Another little interlude took the viewer behind the scenes, looking at different parts of the concert production, including a time lapse of setting up the concert. A sextet of gospel singers shuffle in the back of the stage to backup the band on "I'm Alright." The band certainly shows excitement of having all these extra little fillings for the concert video, and it helps create a bigger sound. Cranking it up one last time, "Revolution" rocks the crowd with the help of the backup singers. "Flood" marks the last track of the show, bringing the original acoustic rock fad to DVD and asking the crowd to fill in the blanks. The trio of strings are back for this song again, making it sound fantabulous.

A brief backstage interview of the band talks about the band and The Eleventh Hour. "The Edge of Water" starts the encore, complete with more strings and a lengthened ending. The gem of the disc for longtime fans is probably this full performance of the epic "Worlds Apart," first beginning with Dan singing and Matt on guitar and harmony. The only thing missing from this one is the female vocals that they just drop. But, never fear, the extensive bridge is there, and brings in full band with some atmospheric electric and drums. The instrumental part afterwards makes it a really beautiful version of the song. The instrumental portion includes videos of different parts of the world, ending in the beautiful face of Jesus and turning into a chorus of "Hallelujah."

Towards the other end of the arena they set up an intimate acoustic set, and while they were walking over to it, they included a bunch of funny clips. Set up in a circle with the company of a string bass and other orchestral instruments, they struck off the set with "a very old song," "Boy on a String." Saying that they need a new version to enjoy an ancient song, they go into a more keyboard-driven, slower version of "Liquid," which was interesting to hear at a different pace. "Needful Hands" is handled almost verbatim to the version on Exodus. Rounding off the set is "Something Beautiful," another enjoyable song from The Eleventh Hour. And finally, while the credits roll the ladies from the gospel group goofing off about their new group, "bottles of dirt."

Sadly, the video quality on this disc was overall pretty poor. First of all, nothing on the disc is shown in anamorphic widescreen, which has a higher quality and is optimized for the future of video... widescreen TVs. Much of the video from montages and such, especially making-of or backstage interviews, is a very grainy picture. The concert footage is just fine, because it was produced for Pay-Per-View TV, but the whole DVD suffers from very unprofessional video quality in spots. Problems bringing the video to DVD format were also found, as the edges of objects are commonly blurred, and the bright stage lights easily bleed their color onto neighboring objects. The content of the video is always entertaining, but suffers from poor video quality, which cannot be due to their attempt to squeeze over two hours of video footage on a single DVD. For example, The Fellowship of the Ring has three hours of the movie on a single disc, and every shot from that movie looks better than this disc, which implies that the Jars could have worked for better video quality.

Another skimpy portion of 11ive is the sound, which is only presented in stereo sound, not the industry-standard 5.1 surround sound. This entails the lack of really roaring bass and the ability to make the sound seem to come from all around you. Many of the mixes, live and behind the scenes, could be better, too, for the care in making the sound quality as good as a live CD would be is just not given.

Most DVDs these days have at least a couple special features, usually including some behind-the-scenes footage. "ten:thirty" is a collection of video shot during the making of The Eleventh Hour in their homemade studio, Sputnik Studios. Complete with lava lamps and other homely decorations, this was some more homemade EPK material, including lots of interviews on the making of their latest disc. All the guys loved the experience of doing their own record, as they all attest, and this making-of includes lots of footage of them recording in the studio. Messy hair, deciding what to have for dinner, and many other embarrassing moments are included, plus a video montage of them playing and singing in the studio with the backdrop of "Revolution."

Sam Shifley, guitar tech for the band, offers "artflick," a unique 30-minute video montage that will mystify most everyone who sees it. Although the audio consists mostly of Jars songs, the video flickers between static, jars logos, other equipment, and live and studio footage. Only those who enjoy rather quirky things that some people consider "art" need apply themselves to watch this film. The backstage footage in this feature is full of silliness, including "Survivor" type candid comments on the other band members, random meals, and even some spiritual reflections.

Finally, a not-so-hidden hourglass on the main menu gives us a beautiful recording of "Frail" from when they did their Stringtown album, a live disc only available to fanclub members. The instrumentation is top-notch due to the attendance of a whole string section, and the audio and video quality is not very bad either. I, for one, want to run out and get the Stringtown disc, because it sounds beautiful.

Overall, 11ive is a great concert video in it's own right, and a decent first DVD release from the Jars, but not up to today's DVD abilities. Let's hope that the next time around, the Jars will push the envelope in DVD as well as in musicianship. Until then, enjoy 11ive, their best concert ever caught on tape.