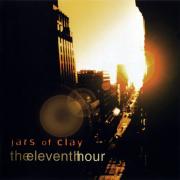 “Disappear” opens The Eleventh Hour with a neoteric pop/rock vibe unlike anything the band has ever pulled off before. Dan Haseltine’s vocals cascade with a newfound energy, and the instrumental accompaniment by Charlie, Steve, and Matt is pure and vivid. 42 minutes later, “The Edge of Water” brings the album to fruition by employing a banjo and using a folksy descant to show their urge for Christ’s return. Not so much of a rebirth as a rediscovery, this is the end result of a band that has again captured the joy they found from being who they are. This is Jars of Clay.

In many ways, The Eleventh Hour is a deeply personal album for me, and I'm sure it will touch other’s hearts as well. Instead of doing a “song-by-song analysis” as has been the habit of my past reviews, I'd like to take a different approach and tell why I find The Eleventh Hour so captivating and possibly even the best album of 2002.

As a college sophomore college student, life has not been easy for me lately. At this age life is often overwhelming and growing up is difficult. Other factors have been thrown in the mix as well, but through all of these trials God is there when you least expect it. This omnipresence of God is the overall theme of The Eleventh Hour. The band members themselves commented on two songs in particular that toss that idea back and forth: “Silence” and “The Eleventh Hour.” “Silence” asks a lot of the difficult questions I've been asking, in its own sleepy acoustic style: “Where is God when I need him? Where is He in the hardest times?” The lyrics describe a person on the brink of desperation: “I never felt so cold / I thought you were silent / I thought you left me for the wreckage and the waste / on an empty beach of faith.” In the times when we want to believe, “The Eleventh Hour” answers back “Rescue me from waiting on this line / I won't give up on giving you a chance to blow my mind / let the eleventh hour quickly pass me by / I'll find you when I think I'm out of time.” Despite the silence, God is there and will come to us in our time of greatest need – the eleventh hour.

On a related note, sometimes life can easily get so repetitive that it becomes routine. A personal experience I've had lies within attending college. Waking up, attending classes, working, studying…it all seems so empty now because it’s come to the point where I've made a routine of it and allowed it to become stale. Disappointed with the way things are going, we tire of walking through “These Ordinary Days.” The premise of this track is that God’s love makes everything better by far. Just think about where we would be without Him! Again, it’s another guitar based song, not to mention one of the slower ones on the album, but it captures the emotion of a fervent prayer. Desperate to make a change, we ask God for a “Revolution” in our hearts, souls, and minds, and the energy put out by this half acoustic, half electric rocker is awe-inspiring. The time has come for us to quit sinking within our sinful way of life, stop being lazy, and do something! The band even takes a retrospective look at themselves and the impact they strive to make in the lyrics: “If you wanna learn to play the rock guitar / then throw down your guns, you're gonna be a star. / You gotta begin with who you know you are / to be a Revolution.” The truth is, I've looked at myself one too many times and discovered that I despise the sinful person I am. I hate the things that sin causes me to do, say, and think, making me hideous and unsightful. Additionally, some days I just don't feel like a “beautiful child of God.” I know I'm hardly the most attractive guy to walk the earth, and I don't have the looks to be in a boy band. Girls don't squeal and faint over me (and I'm actually halfway thankful for that). Thankfully, God can truly make us into “Something Beautiful” if we ask Him to, and despite our sinful nature or our physical looks, we are beautiful in God’s eyes. These are the promises and reminders that keep me going, and “Something Beautiful” abounds with them. It is beautiful indeed.

In the end, what it all boils down to is that I need God. Christ is my life and my sustenance; the air I breathe and my reason for living. “I Need You,” the first #1 single from The Eleventh Hour, directly declares this to God, keeping with the motif that He will be there for us through our trials and tribulations. “I Need You” is also a delightfully nostalgic return to JoC’s self-titled debut. The pop-like drum loop during the bridge brings back memories of “Liquid” while the band’s echo of Dan in the chorus is music to the ears.

I can't honestly say I can relate to the remaining three tracks, yet “Fly” (which discusses coping with death), “Scarlet” (an untraditional love song), and “Whatever She Wants” (where a treacherous vixen manipulates her counterpart) are all just as brilliant as the rest of the album. In case you didn't already know, the band produced The Eleventh Hour themselves, which makes it an even more stunning masterpiece. This is definitely the record that If I Left the Zoo should have been. I hope it strikes a chord with your lives as it has done in mine and helps to draw you nearer to our blessed Lord.