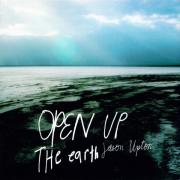 Many prayers have been prayed for God to open the heavens; how often have we asked Him to open up the earth? We ask for the outpouring, but are we really ready to receive? And will He open up the heavens when we haven't first opened up to His reality?

Open Up the Earth takes the heavenly truth of the kingdom of God and brings it down to an earthly level. Not that the bringing down degrades or somehow harms the purity of this kingdom. Instead it allows us to partake of His goodness. And it allows us, as little children, to bless our Father in the here and now, for He has appeared in the here and now. It's no longer about the "Sweet by-and-by" of heaven; God is a God of the present — of the storms, blood stains, and tear trails. He still walks the streets.

In the stylistic tradition of Remember, Jason Upton displays spontaneous worship in its best form. What these songs lack in structural form they make up in passion. Yes, the songs remain musically appealingâ€”music theory still plays a role—but these are "songs of the moment." Jason and the band rehearse chords, notations, rests and crescendos. But when leading a crowd in worship, these songs turn fluid. New words appear, new chord progressions develop, new drum beats form, and the body of Christ is caught up in an entirely new experience. The Holy Spirit is as active in the music as the human musicians.

This two-CD and one-DVD collection is quite unique. According to the CD jacket, "Open Up the Earth is a collection of 2 track, off-the-board recordings, mixed live." There were no post-editing sessions, no studio touch-ups, and no pitch alterations. This is raw music in its best form. The two CDs contain almost three hours of songs like "Samuel's Awakening," a prayer for God to awake us with His voice. "A Better Way" is a twenty-three minute track containing simple yet profound lines like, "Jesus came to show us the better way / Jesus, show us the better way." Jason re-records "In the Silence," which first appeared on Jacob's Dream. Here it develops a faster tempo, and a high-pitched recorder, almost Scottish in flavor, sings along with the piano in a haunting melody. "Apple of His Eye" is a variation of "One Reason" from the Faith record. Pieces of "Glory Come Down," also from Faith, are scattered throughout "Open Up the Earth" and "Till the Ground." The song "Peace" reflects just that, and it serves as a reminder that in the midst of every trial, His peace is there for the asking

The DVD contains all the songs from Disc 1 as well as "Glory Come Down" and "Into the Sky," a song Jason co-wrote with his young son, Samuel. The church in Harrisburg, PA where Jason appeared happened to have a film crew who recorded the entire evening. This rough, non-professional video presentation became the DVD. But while the DVD lacks technological gadgetry like polished graphic arts, it contains the raw emotion of the evening. Now those who cannot see Jason live can join these musicians who come together to craft a unique worship experience.

If I've ever said it before, I say it again: Jason Upton's music is not for the weak of heart. This is for the seeker hungry for something beyond "three fast songs and two slow songs." Open Up the Earth is for the Christian tired of already-digested praise choruses. I don't mean to put the other music down; there's a time and a place for every genuine expression of worship, in whatever form it may come. But I sense a Keith Green quality in Jason Upton, a John the Baptist quality, a voice crying in the wilderness for the church to return to genuine Christianity.