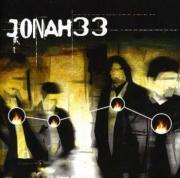 If you're wondering what kind of band Jonah33 is, just check out the cover of their self-titled debut. Their figures are blurred and distorted, and you can't see their faces, but each band member has a flame pictured on his heart that burns passionately for Christ. That said, you really don't need any other reason to listen to Jonah33, but for those of you who feel you have to justify everything, read onward.

Jonah33's greatest strength lies in their lyrical content. This is a band who is completely sold on proclaiming the Gospel through their music; thus, you won't find any "half-way" songs here about girlfriends, baseball, or magic shoes. Instead, every track on the disc crams as much ministry into 3+ minutes as possible. Take the opener, "Watching You Die," for example. It presents a unique point of view from the eyes of an individual who chooses to ignore the Great Commission, but as a result what he sees is grotesque and hideous: "It's like acid dripping in / I see it burn but don't wipe the skin / It's not my fault, once again / but there's blood on my hands." Clearly the antithesis, "Too Much of Me" discloses this same individual coming to grips with his inflated ego and praying for God to invade his life with His presence. Track #3, "All For You," may be predominantly musically driven but still exercises your mind with a truth that few have ever thought about: "You know that even if you were the only one He died for, that means only your sins drove the nails." "Death and the Life" twists the Alpha/Omega premise, reaffirming that Jesus is the end of death and the beginning of new life, and a snapshot of the band musing with disgust over their earthly possessions is captured in "All That Matters." While not overtly dramatic and even less artistic, Jonah33's lyrics have pinpoint precision, similar to that of Seventh Day Slumber, in their quest to spread the Good News.

Fans of Skillet, Smashing Pumpkins, and even Jeff Deyo's old school Sonicflood will have something to write home about after listening to Jonah33. Their musical spectrum ranges from melodic worship ("God of My Life," "Beautiful") to garage rock ("All That Matters," "Shine") to industrial fanfare ("All For You," "The Difference"). Furthermore, Skillet's John and Korey Cooper both had a hand in helping out their labelmates, and their influence is apparent through minute touches such as the "Earth Invasion" intro to Jonah33's "The Difference" and the grainy pause in instrumentation during "Watching You Die." Contrastingly, "Faith Like That" borrows stylish guitar work in the vein of Jeremy Camp, and "Working Man's Hands" closes the album with a meager bit of soothing Southern rock. In other words, there's a little something for everyone - well, except country music fans of course.

A dissonant chorus on "Shine" and the grating lack of rhythm during "All That Matters" are merely a couple of hindrances that keep Jonah33 from being 100%, but when all is said and done, this self-titled debut is not a regrettable listen. It is, however, exciting proof that this group presents a bold, full-fronted effort to bring the saving grace of Jesus Christ to the masses. Hopefully, time and experience will treat these guys well. The next Skillet, perhaps?