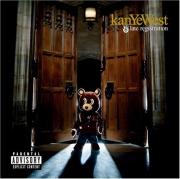 The word "genius" gets batted around far too much these days. Forget Shakespeare, Stephen Hawking and Einstein... according to Rolling Stone, Eminem qualifies. And so does Charlie Weiss, the head football coach at Notre Dame, due to his ability to call the right plays at the right time. And then there was Ray Charles, God bless his soul, who really didn't do much but marry church music with secular lyrics, and inspire a very good movie starring Jamie Foxx.

The last time I heard the "G-word" in a context that really struck me was late in the summer of 2005, when Kanye West was on a music video channel to debut the video for "Gold Digger," the first single from his now-worshipped sophomore album, Late Registration. Ye, as he's called, was in the midst of an interview with a ditzy VJ and, for whatever reason, broke into verse, either quoting his own lyrics or making up new ones on the spot. The crowd watching the performance broke out in cheers and applause, and the VJ made her proclamation: Kanye West, the world's most famous college dropout other than Bill Gates, was certifiable. A genius.

Now, I didn't think much of it at the time, because the day I begin to rely on a video jockey to diagnose brilliance is the day I squirt extra-hot Tabasco sauce up my nose. But in the ensuing months, calling West a genius became almost as clichÃ©d as Bush bashing. The discussion was based almost entirely on Late Registration, which went on to win three Grammys and solidify Ye's position beside 50 Cent atop the hip-hop heap. And all of this begs an obvious question: Is it true?

My initial reaction to LR was an emphatic "yes," and had it not been for my conscience, you'd be reading those words on this website instead of the ones I'm typing right now. Because no matter what Relevant media tells you, this was the best rap album of '05, hands down. Though there are a few rough spots, cuts like "Touch the Sky," an inspirational ode to human potential, the touching (if somewhat hackneyed) "Hey Mama," and the two versions of "Diamonds from Sierra Leone," are almost enough to back Ye's braggadocio: at times this new stuff does, as he suggests, "sound like the 'best-of.'"

But as intelligent and edifying as the mentioned tracks are, there's plenty of stuff that simply isn't. "Celebration" is a Stevie Wonder-esque nod to the birth of West's illegitimate child, celebrated with alcohol, drugs and sex; "Addiction" is a catchy but depraved track centering on West's three obsessions: money, girls and weed; and "Gold Digger" is spoiled somewhat, as many of the tracks here are, by profane diction.

It's easy to find redeeming value in Late Registration, but equally as hard not to get bogged down with the obscenities and other amoral elements. Fans and hipster Christians will point to the fact that almost all of the songs here have some kind of positive message and tell you to stop being so uptight. Conservatives will tell you those messages are overshadowed by pervasive swearing and N-bombs. Both have a point, and to be honest, I fall somewhere inbetween.

What it comes down to for me is this: the music on this album is almost uniformly excellentâ€”maybe even brilliantâ€”but no kid younger than 18 should listen to it, if only because of the language and subject matter. Truth is, I'm 23 as I write this, and bought this album twice on the merit of the beats and rhymes. I ended up discarding it both times because I couldn't get past the other stuff.

Is Kanye West a genius? I can't give you a decent answer, even if an air-headed VJ thinks she can. Regardless of what I've led you to believe to this point, it probably takes one to know one. And I'm not one.

But it doesn't take a brilliant mind to grasp that there isn't any overwhelmingly convincing reason why Late Registration should be in your record collection.

Note: PluggedInMag.com is an excellent resource for detecting the morally positive and negative aspects of most major-label albums. If you are worried about these aspects, please read their take.