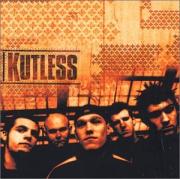 Staind, Nickelback, and Puddle of Mudd. Like these rock bands? Chances are they probably won't record a Christian album anytime soon. Fear not: if you're a fan of those secular guys but looking for something more spiritual, Kutless makes a fine choice for a Christian alternative. Not only is their stuff squeaky clean; Kutless just oozes with talent. These are five guys who know how to rock hard and praise God while doing so.

"But Rick," you're thinking," they're a Christian band, and everyone knows that Christian bands are never as good as their secular counterparts." My friends, prepare to be amazed. Kutless's self-titled debut on BEC Recordings will blow you away. Beginning with their first single, "Your Touch," Kutless grips your ears and won't let go. "Your Touch" contains some of the crispiest rock this side of a Nestle's CRUNCH bar, and Jon Micah Sumrall's Scott Stapp-like vocals glide through the low notes and paralyze when he screams. He's also a heck of a singer, as evidenced on "Run," and his band follows suit by letting their instruments cool and carrying Sumrall's vocals upon a soothing acoustic melody. The addition of a violin makes "Run" the album's sleeper hit. Don't let the term "sleeper" fool you, as things don't stay quiet for long. "Pride Away" surges with that jump-around-bang-your-head energy essential to any hard rock band's success. Things heat up immediately after the bridge when Kutless represents by busting a rhyme and cranking the electricity up a notch. Tangled distortion and silky chords fuse to create "Again," an opaque track that plods along heavily, staggering under its burden of weighty guitars. Photocopying Creed's "What If," Kutless introduces their doppelganger entitled "Tonight." At home in any massive speaker system, "Tonight" holds nothing back, releasing an onslaught of fiery strings, piercing cymbals, and enraged screaming. It's sure to be a concert favorite. In a surprising twist, Kutless performs the disc's closer, "Grace and Love," with nothing more than vocals, drums, and a keyboard. It results in a resplendent ballad similar to Skillet's "Will You Be There (Falling Down)" with the exception that Kutless's is more raw. Make no mistake, this band has all the musical bases covered.

"But Rick," you're thinking," bands who are musically talented can't write a decent song to save their lives." I say to you again: my friends, prepare to be amazed. Kutless pens a plethora of positive rock with lyrics that either drown you in thought or cut to the bone. Try "In Me" on for size. The track is a testimony of finding new life in Christ and putting to rest the old sinful nature. Kutless takes special care not to condemn or offend but instead presents their message straight-forward, unashamedly proclaiming Jesus Christ as the one and only way to the Father. The quintet makes their "Vow" on track #4, praising God for his mercy and promising, "You'll be all of my life and I'll never think twice to do all that you have for me." They then take a third-person approach to "Down," reciting the story of a girl who wants to fly away from her lack of self-esteem, her anorexia, her compulsion...only to find out that she's destroying herself in the process. Kutless recommends God as the prescription, but sadly we never find out if the heroine takes her medicine. Instead, we move on to a brighter hope with "Saved," the definitive song to listen to if you're wondering what Kutless is all about. The first half of the track is a witness to someone who is lost: "You ask me why I need this faith. I tell you now it's the only way. To be set free from all your pain, you must accept these words I say." After explaining the salvation process, Sumrall then shouts to the Lord, "I cry out to You with the love that fills my heart. I give my life to You; in faith I won't depart." Clearly grasping the ideals of faith, hope, and love, Kutless's songwriting promises a pick-me-up when you're feeling like scum.

BEC has been doing a lot of the right things lately and signing Kutless was certainly no mistake. In a time when high album sales often cover-up shoddy performance, who would have thought such well-rounded artistry could emerge from hard rock oblivion? "But Rick," you're thinking. Stop thinking. Go get this album without a second thought and have peace of mind.