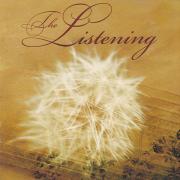 Like all traveling shows, the circus has left town. The Rock 'n' Roll Worship Circus, that is. But don't worry just yet; they've changed their name to reflect a whole new musical exploration. Much like the fog of concert dry ice, The Listening seeps into the ears. Or perhaps the cover-art analogy works better than my contrived image: a dead dandelion, full of seeds, listening for that wind to carry its influence across a huge expanse.

This debut seed holds a sound barely reminiscent of the Circus days. Gone are peppy tunes like "Ride," "The Telephone Song" and "A Beautiful Glow." The band explores darker themes in both musical tone and lyrical substance. A prime example is "Lovely Red Lights," describing the red-light district of one, if not all, of the European countries the band visited while on tour. A mourning guitar accompanies synthesizers, creating a sorrowful ambience. Wilson sings, "Pick her out to take her home / Or get it right there for seventy euro / Tonight death looks right / Floating on the sea of lovely red lights." In the midst of this barren view, hope exists: "Time to rest your eyes / Daylight follows / That steals your joy that brings you sorrow." This daylight is centered on Christ, the illumination that exposes the true nature of the "joy" of sin.

It takes time for these idols to die; "no one can prepare you for the fires of hell" ("When the Idol Dies"). And there's never a purpose in pointing accusing fingers at those found under the influence of these red lights, because as Wilson sings, "You just never thought you'd ever see me, you'd ever see me here" ("When the Idol Dies"). Lovely red lights could easily entrap any of us.

Easy entrapment is certainly found in this album's music; you're instantly drawn into the Pink Floyd sound, and then lyrics of fallen humanity accost your senses. The drums, guitars, and Moog synthesizers combine to create a fresh sound that has yet to hit the CCM market, and I doubt the majority of the CCM audience is ready for such a message. As musically catchy as "Hosea in C Minor" may be, it's as sobering as the Biblical book of Hosea: "You didn't know you were sleeping with demons / You wouldn't listen to the husband who cried from the tops of cathedrals and churches / You walked right on by / You went your own way."

A song that combines the ambient sound without the emotional heaviness is "Everything is Nothing." It's still very much a delicious musical creation, still very much a part of this record. But it focuses on the splendor of love, specifically a romantic sense of love: "Heard your voice gently say my name / The moment we kissed, the moment we became / Two different spirits somehow made the same / Two separate souls into one frame." Even though God is never specifically mentioned by name (His presence is referred to as "the glory of the Feared"), redemption permeates this song. In fact, it permeates the entire album, and His influence can be felt in the undercurrents of the images.

The Listening will end up receiving distribution in mainstream music stores, but if you purchase the album directly from the band, a bonus CD with three tracks is included with the eleven-song album. It contains "Isaiah," a song directly referring to God through vocabulary Christians will understand: "Oh my Spirit, come / Let's communicate without using our tongues / I've been laying here beside you for so long / But [it's] Your body that I need / It's Your blood that's rushing over me." This is language more representative of a worship leader, or a Christian crying out for more of God, while the wording of the main album remains more open to interpretation. A non-Christian seeking something more in life can sing the primary songs. The other two tracks, a stellar remake of "The Undiscovered" (from the album Welcome to the Rock 'n' Roll Worship Circus), and the acoustic, Beatles-esque "If You Don't Know Where it is You've Gone," serve well as bonus material.

The Listening, as a unified whole, is an amazing first album from a band forging a new identity. While worship (as a genre) is no longer the primary focus, God is still very apparent in the work. I imagine these four guys will have great success in reaching a diverse audience. Just as dandelions end up growing in the strangest of places, you have no idea where The Listening will land.