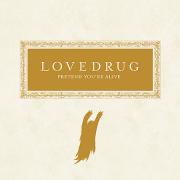 Remember when you were a kid, and at night your closet would come alive with hideous green monsters of various shapes? They would creep toward your feet (you knew how they moved so you didn't need to open your eyes), anxiously waiting to nibble your toes. Did any music coincide with their crawl across the carpet? How about Lovedrug? Pretend You're Alive is the adult monster-in-the-closet dream—a world of nasal yet stunning vocals, crisp yet dirty guitars, and a hint of soft keys to tip the nursery.

The world of "Blackout" only exemplifies my attempt at analogy. Lyrics bordering the hideous ring out against an addictive melody line of guitar and drum patterns: "And when he's punching her skull on the bathroom floor / Does it get him off, oh yeah / Does it get him off to know / That sometimes we all blackout?" After studying the stick-person in the CD jacket, holding what looks to be like a head of black hair, I can understand the image present in the phrase, "It's 4 a.m. and I am is coming after you tonight." And yet, like the 4 a.m. nightmare, understanding isn't completely achievable. Misinterpretation of lyrics might occur on the part of listeners, but lead singer Michael Shepard's writing ability displays depth in poetic maturity. "Radiology" says, "I believe in my garden home / And the chemicals I need to make it grow / Later on, the glowing teeth / Lessons learned in radiology." "Paper Scars" reads, "Fall into pairs like two ugly fish / Too rare for extinction I know / The veins in your hands felt soft like summer / Calm to the touch."

"Down Toward the Healing" is the song that escapes the bedroom closet world. Soft piano and floaty vocals begin this track with "I want to make you happy / But I've fallen, I'm sorry." Apologies and regrets combine with thanksgiving right before the rest of the band kicks in: "You don't know how cool you are / To find the ways to love me without shame." With the onset of drums and jazz-influenced bass and guitars, Shepard dreams, "I want my life to be red / With trees and like autumn." Considering the idyllic, easy life, a life away from the vermin-crowded streets of "Blackout," Shepard says how he would "give my soul to the one who has the courage / To find me and free me now." After considering the options, and after the music crescendos to rock supremacy, the moment of surrender arrives: "So let the thunders take me under and break my legs tonight / Hallelujah, I'm breathing."

Biblical images invade this nighttime recording. Angels, demons, heaven and hell appear throughout the lyrics. "Spiders" indirectly refers to the sermon by Puritan leader Jonathan Edwards ("Sinners in the Hands of An Angry God"). The reference "I hear Egypt is nice this time of year" in "The Monster" is reminiscent of the children of Israel wanting to return to their former slavery. There's even a reflection of Elijah being caught up to heaven when Shepard sings, "I closed my eyes as the chariot came" ("It Won't Last").

I still don't completely grasp Pretend You're Alive. The music reaches into the unexpected and remains melodic enough to serve any setting. Yet a deeper study of the lyrical content opens the mind to an Alice in Wonderland world. The piano in "Paper Scars" brings the listener back home, back into the morning sunlight, but there's still that haunted hole to dissect. The angels and demons still require study. The potency of Lovedrug still takes time to ware away.