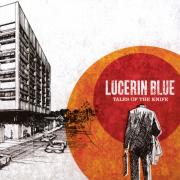 Roughly 30 minutes by car from the home I grew up in sits Goderich, Ontario. It's a pretty little town, sitting on the coast of Lake Huron and sporting the county's main courthouse, most impressive museum (which, admittedly, isn't saying much) and one of its few movie houses (a uni-plex that usually doesn't get ahold of films until they've been out for two months everywhere else). And to be honest, I was pretty sure that nothing much ever happened there. But during the late 90's, a small collection of lads who called themselves Natural Saint were conspiring to make it out of there and have their music heard on a national and international stage. They eventually became Lucerin Blue, and Tales of the Knife, their debut with Tooth and Nail Records, is a major step in that direction.

As its official and Allmusic.com bios reveal, LB is among the throng of alternative rock bands who fall somewhere between grunge and metal and are difficult to label. Frequent comparisons include the Foo Fighters, Linkin Park, Rage Against the Machine, and Pearl Jam, but only the last is really accurate. To me they sound closer to the rocked up, fuzzed out emo of former T&N band The Juliana Theory. But I get the impression that nine out of every ten listeners will come to different conclusions regarding the band's sound, so take that for what it's worth.

The lyrics are often opaque, which is somewhat refreshing, given the number of bands who seem to dumb down their poetry for the masses, but frustrating in that it takes a few listens to grasp their meaning. Themes include relationships, spirituality and (I think…don't quote me on this one...) seizing the day. This is a band—and an album—that requires patience to appreciate. You won't find any tracks that are radio bait, or that you'll be humming in the shower, but with persistence and diligence, the listener comes to a place where the music is valued.

Does it sound like I tried hard to find reasons to like this album? Probably, because I did. At first I was seriously unimpressed and was ready to write a very negative review. But I can say with all sincerity I'm glad I bit my tongue (...er ...typing fingers) and gave it a chance. Tales of the Knife definitely sounds as though it were recorded on a shoestring budget, and it's not terribly accessible. But it definitely has the ability to grow on you, whether you're a biased neighbour of theirs or not. Cruise down to the bookstore and spin it a few times. You might just like it.