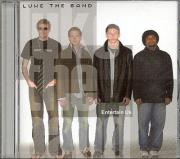 It was a grim, overcast Friday afternoon when I first listened to Luke the Band (not to be confused with Luke, the book of the Bible, or "Luke, I am your father"). For an indie band, they managed to catch my attention with the quality packaging of their Entertain Us EP. What impressed me even more, however, was the quality of their music. Equipped with nine solid rock/pop offerings, my dreary ride home from college was soon painted with energetic reds and oranges, deep, relaxing blues, and unfortunately, a few glaring black smears.

Entertain Us is simply a musical romp. Kicking off with the smoothly mixed "Face to Face," Luke launches an onslaught of catchy guitar hooks, well-placed drum loops, and meaningful yet accessible lyrics. "Ivy" gives frontman Luke White ample opportunities to stretch his vocal chords, easily hitting a high falsetto while the rest of the band backs down for a while. The enjoyable minimalism of "Down Your Street" continues the trend by putting White's vocals and one mere guitar in the spotlight. What is lost in terms of toned down instrumentation is made up for by introspective lyrics, which analyze the highs and lows of a relationship that was never meant to be. Another lyrical gem, "Son (Wait Here for Today)" is where the band seems the most comfortable on the disc, melding both fine songwriting and crisp melodies somewhat like that of Lifehouse. Given the somewhat redundant chorus - "Wait here for today, wait here for today / I'll wait to hear you say / wait to hear you say" the track churns out a decent amount of overall listening pleasure.

Unfortunately, that's about all the leeway I can give Luke the Band. Like any other up and coming act, Entertain Us is not without its share of flaws, albeit nothing that can't be easily fixed in the future. "Pictures of War" is the first track that fails to impress, partially due to White's softened vocal performance. Throughout most of the song his voice is barely audible except during the chorus, which suffers from repetition much like "Son" did. Furthermore, while "Caught You Kissing" has the potential to be the best overall cut, it's held back by unbalanced harmonies, both instrumentally and vocally. The lyrics are without a doubt the shallowest on the record, and a minor profanity kills the remaining sheen that "Caught You Kissing" had. "Beautiful Goodbyes" also bears lyrical depression, waxing philosophical over vague, un-interpretive references that mean nothing to the average listener. It's also a disappointment to hear that no other songs on Entertain Us featured as much originality and experimentation as "Face to Face" did, giving the rest of the project a very cut and dried feel.

In spite of my gripes, I can't say that Entertain Us didn't bring me some joy on that glum Friday afternoon. While some areas of the disc were more impressive than others, it didn't hurt to try something fresh for a change, and Luke the Band certainly was nothing short of. Knowing that these guys still have room to grow as artists excites me, so it'll be nothing short of interesting to see what they cook up next. Chitlin' Jell-O, perhaps?