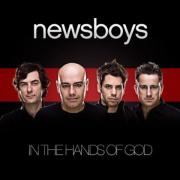 Ask most bands whether having an iconic lead singer is a good or bad thing and they'll likely tell you that it's a little bit of both. On the one hand, having a strong, readily-identified presence behind the microphone can often be just the ticket to propel a given musical collective to the very heights of commercial triumph. On the other side of the coin, though, many of those same groups have stood by and watched helplessly as fan interest fell through the floor in the wake of their vocalist's departure. Deny it as they may, the members of the Newsboys have almost surely been pondering such matters since early March, when word of lead vocalist Peter Furler's retirement from touring and recording duties (he will continue on in a songwriting and producing capacity) – and subsequent replacement by former dc Talk singer Michael Tait – was first made public.

The good news is that, if Furler's impending exit cast any sort of pall over the recording sessions for the latest project, most of those who hear it will be hard-pressed to notice. Those wanting proof would be well served by dialing up "The Way We Roll" and "This Is Your Life." The infectiously catchy, riff-heavy melody line of the former stations the enthusiastic album opener at the middle ground between, say, "Reality" and "God is Not a Secret." The latter, by comparison, calls to mind the semi-ethereal mid-tempo pop of rightful fan favorites like "Entertaining Angels" and "Believe." And the grand, sweeping remake of the Hillsong United modern worship anthem, "Lead Me to the Cross," is easily the equal of any of the material from the Adoration or Devotion efforts.

As impressive as those songs are – and they are – Furler & Co. truly hit their stride when they stray to either side of the radio-friendly pop/rock formula that has been their bread and butter for the last decade. The dissonant, almost ominous guitar work and emo-meets-post-grunge textures of "No Grave" lodge the commanding cut – far and away one of the hardest rocking in the band's recent catalog – firmly in the listener's long-term memory. On the other end of the spectrum is "The Upside," an irresistibly bouncy slice of sunshine pop that could conceivably be placed on a '60s mix tape between the Turtles' "Happy Together" and the Beach Boys' "Good Vibrations" without most folks being any the wiser. And the closing number, "RSL 1984," finds Furler trading in his quirky, mostly outward-looking humor for an honest, warts-and-all account of the challenges he faced as a child growing up in Australia.

While the overly languorous tempo of the title track, the cutesy, clichéd lyrics of "My Friend Jesus" and the lack of strong melody on entries like "Glorious" ensure that Hands isn't as consistently solid as Step Up to the Microphone and Love Liberty Disco or as relentlessly giddy as Take Me to Your Leader,  the rest of Hands stands shoulder to shoulder with just about anything the group has released to date. And points go to the members of the Aussie/American quartet for showing a willingness, even with 22 years and 12 studio albums under their belt, to veer off of the well-worn path and stake out new musical territory. Only time will tell whether life for the foursome in the post-Furler era will be able to match that which has gone before it. As it stands now, though, the charismatic front man can step down from the outfit he has lead for the past two-plus decades knowing that he goes out, not with a whimper, but with a bang.