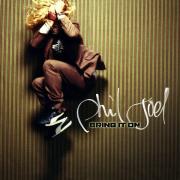 Solo albums are nothing new, but there seems to be a number of them available nowadays. Many among the ranks of CCM's top bands - Derek Webb, Andrew Osenga, and, of course, all members of dc Talk - have seen fit to explore their talents outside of the bands that made them famous. Phil Joel, a long-time Newsboys bassist, first tossed his hat into that ring in 2000 with Watching Over You and continues with his recently released Bring It On. Fans of the 'boys will be thrilled with Joel's effort, which rarely strays from the alt-infused pop that characterizes most of that band's recent offerings. Though bassists are often seen as integral to a rock band's sound, but less talented than their peers, Joel shatters this stereotype with solid songwriting, lush instrumental arrangements and simple but poignant lyrics.

The album begins with "Resolution," essentially a call for harsh honesty and accountability to Christ. Joel uses violent imagery - "Push back / Break me to make me / Tell me straight...How else am I going to find out"—in lobbying for a discipline that is neglected in many faith circles. The vocals are woven in between lightly distorted guitar tracks, with prominent drum and tambourine lines. Fans who finished listening to the Newsboys' Thrive and wished for more will be pleased.

"Return" follows, a down-tempo ballad reminiscent of 80's era U2 and more recent delirious? material. The lyrics point out that seeking God does not end the day we meet Him, but is a process that continues throughout life. Similar messages are found in "Take My Heart" and "Fallen in Love," which appear later. "Return" is succeeded by another similar tune, in which Joel asks his Creator to make him "The Man You Want Me to Be." The song is one of the album's most honest, a warts-and-all testimony of Joel's own hardheadedness, disobedience and eventual repentance.

"I Adore You," the following track, is one of the catchiest and radio-friendly, and may be an attempt at worship. Such songs can seem contrived and obligatory—lip service to please the label or Christian book store owners—when tackled by some Christian artists, but Joel comes across as intensely genuine and makes listening to it easy on the ears as well.

"Passing Angel" is next, an ode to an unnamed loved one who has passed on. Joel and co-writer Lindsey Jamieson, however, boldly refuse to say goodbye to this person, confident of a reunion in the Eternal.

The only disappointing track is "Move," an upbeat but cheesy "get-up-off-your-feet" tune that might play well at live shows, but falls flat when blasting out of a car stereo. If nothing else there are too many "Hey, hey"s (the song opens with five of them) and nonsensical syllables to please the listener.

As stated, fans of the Newsboys will love Joel's latest offering. Newcomers will be less impressed, but not entirely disappointed.