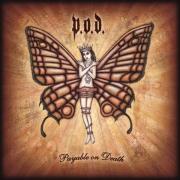 As the last few notes of "Eternal" drift through your ears, you sit back completely relaxed and marvel at how Payable on Death grew on you so quickly. It seemed like just an hour ago you were muttering curses in your head about P.O.D.'s new radio-friendly style. Now as the soothing, salsa flavored guitars—one of them belonging to Phil Keaggy—fade to black, you collect your thoughts and try to remember where the turnaround began.

The last few tracks were nothing short of impressive. "Asthma" had to be the most raucous cut on the disc, you thought. It reminded you a lot of The Fundamental Elements of Southtown, when P.O.D. let loose a fury of ear-piercing shrapnel and shrieking vocals. "I and Identify" was no different sound-wise, but you appreciated the comfort in Sonny's vocals: "Long suffer, patient, kind / Never proud, no jealousy, unselfish / no anger, no memory wrong / Separate my wicked ways." Then you recalled "Waiting on Today" and grinned at new member Jason Truby's apparent influence on P.O.D.'s music. His former stint as a guitarist for Living Sacrifice seemed only to enhance "Waiting on Today," as Traa's bass was accompanied by a cohesive flourish of metal. Thinking back even further, you thought about how "Freedom Fighters" seemed to have everything going for it: a straightforward, epic style; tight, fluid beats; even lyrics that presented a called to action: "I say if you don't like it this way, then why stay... live free, be free, die free." Indeed, the last twenty minutes of music had been nothing but pleasurable.

Then you suddenly recalled track seven, "The Reasons," and your grin sagged a bit. While it had been well written, its sagging pace didn't seem to fit the intensity of the other songs on the album. Its predecessor, "Revolution," was brought down only by its reggae style chorus; it felt much too forced rather than natural. Once again, however, Sonny's lyrics struck a chord with your soul: "Rebel against the I, bring down the self / Mutiny me! Overthrow you! / Rebellion starts within." As you pondered the importance of those words, you were reminded of the dedication infused within the lyrics of "Find My Way," a heavy romp through an industrial hurricane illuminated by Truby's cries of "I'll be there!" Your memories began to bleed together as you thought back towards the beginning of the CD, where "Execute the Sounds" met your approval, not only for its successful reggae poetry but also because of Wuv's prominent performance on drums. Briefly, "Will You" ran through your ears once more, the recording's first single and the first song that caught your attention. "Will You" was what you thought to be a remarkable evolution for the band, sacrificing the hard core murmurs of "Set It Off" and "Alive" for a more inviting, yet edgy rock grip. In fact, had it not been for "Will You," you would have been discouraged by its surrounding brethren, "Wildfire" and "Change the World." It was those two songs that had given you skepticism about Payable on Death in the first place, due to shoddy musicianship and a few thrown together lyrics. Had they been cut, you probably would have enjoyed the album more as a whole.

As the last note of "Eternal" floats through your ears, you sigh. Maybe it wasn't as bad as you first thought. Sure, the band changed their style, and there's a certain adjustment you're required to make when that happens. But P.O.D. proved to you once again that their music and lyrics are real. In doing so, they've brought hope and the Gospel to another new legion of fans. Radio-friendly? Yeah. Laid back? Definitely. Comfortable? You nod approvingly. Even the most hardcore have to stop jumping around sometime.