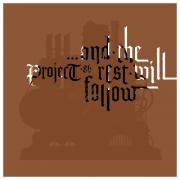 Given the varied nature of the band's back catalog, it is hardly surprising that debate currently runs rampant over which Project 86 record constitutes the Orange County foursome's defining work. The self-titled debut and sophomore outing, Drawing Black Lines, were of a piece with the energetic, rap-metal workouts of artists like P.O.D. and Rage Against the Machine. The group followed with Truthless Heroes, a concept album of sorts lamenting the state of the modern music industry which saw front man Andrew Schwab trading his raps for actual singing and his cohorts purveying a less funk-filled, more melodic strain of music. Songs to Burn Your Bridges By, put out independently in 2003 after a difficult split with Atlantic Records, was, perhaps understandably, an angry, punk-inflected release featuring little of the melodic hard rock found on Heroes.

Once again reunited with Tooth & Nail Records, whom they recorded for before switching to Atlantic, ... And the Truth Will Follow is being hailed as a return to the sound of the band's earliest efforts. True to that claim, the raw, stripped-down punk aesthetic of Songs is all but absent on Follow. Similarly, the swirling atmospherics of the engaging title cut seem a logical successor to the haunting minimalism of "Star" from Lines, even as the barreling opener, "Sincerely, Ichabod," calls to mind DBL's towering funk-metal groove. And songs like "Wordsmith Legacy" find Schwab once again rapping his lead vocals.

One could argue that songs like "Subject to Change" ("Return / Return / Return / Return to yourself") and "Sincerely, Ichabod" ("We once drew / Some lines in black / And right now it's about time / We took them back") point to the P86 collective returning, not only musically, but also lyrically, to its roots. Along those lines, the bulk of the bitter, world-weary tones that filled Heroes and Songs are traded for the more positive, outward-looking stance of the first two works. In the same way, while tracks such as "All of Me" ("I recognize the causes / Now I'm cutting all my losses / Shedding the viral skin") and "Wordsmith Legacy" ("I have chosen / And breathed / And forgiven / And changed") could apply to a variety of situations, they hold added resonance as declarations of artists determined to recapture the hope and motivation which first inspired them.

Lest the new album be categorized as mere regression or repetition, it bears noting that unlike Lines and the debut, which at times seemed forced or affected, the swaggering funk of new tracks like "Something We Can't Be" seems looser and more confident, almost playful. Likewise, Schwab & Co. embellish their sonic palette with elements of ambient music and psychedelia for the sublimely poignant death narrative "From December." The attention-grabbing "All of Me," which sounds, for lack of a better analogy, like Anberlin taking a stab at Kool and the Gang's "Jungle Boogie," skirts closer to pure pop territory than anything the Project has thus far offered. And the engaging heavy power pop of "Cavity King" is about as close to Anberlin as any group not actually bearing that name could conceivably hope to sound.

To be fair, the awkward tempo changes of "Doomsday Stomp" render it a bit disjointed, just as the circuitous "Subject To Change" sinks for lack of discernable melody. Likewise, the latest project, as a whole, lacks the consistency of quality and texture that lent each of the last three releases their distinctive personalities. That said, the fifth record catches Schwab and his associates at the top of their game, lyrically. And songs like "Wordsmith Legacy" and the magnificently sublime title cut are the musical equals of anything in the back catalog. Some in the hardcore and rap-metal camps are sure to balk at Follow's more mainstream-friendly production. But even though it comes wrapped in a somewhat glossier package, the new record still packs nearly the same emotional wallop as its predecessors. And what it lacks in uniformity, it largely makes up for in terms of diversity. Hardly the group's strongest effort to date, ...And the Truth Will Follow is nonetheless an admirably engaging addition to the Project 86 anthology.