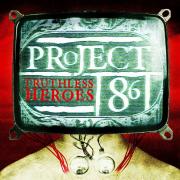 Dark. Brooding. Hopeless. The all too tragic story that is perpetually penned by so many people: the story of their life. The quill is the body. The ink is the despair, deception, and disease that freely flows among the members of our society today. Buffeted on all sides by what dominating culture deems necessary (drugs, sex appeal, power, money, and fame), individuals barely stand a chance to make it out of this life in one piece. This sad tale is boldly presented by the guys from Project 86 in the form of Truthless Heroes.

Drawing from an eclectic pool of inspiration and reflection, ranging from classic and contemporary authors to a graphic artist, Andrew Schwab concocts an intriguing tale of a boy as he matures in an overwhelming world. Far from a hopeful tale, this album depicts the struggles and ultimate demise of a man who chose to follow the piper. Our hero in the album begins life as a frustrated and enraged child focused on making himself a success through the world ("watch as I build my empire / watch as I rise and fall / watch as- / I fight all alone" - "Little Green Men"). True to Shakespearean tragedies, Truthless Heroes has it ups and downs but in the end all is lost. However, the blaring message is clearly heard; seeking completeness in the world will only leave you alone and hopeless, dead at best.

Lyrically Truthless Heroes is a sharp slap in the face. Schwab truly shines as his melodically violent vocal style accurately paints the pains of the album's hero. A highlight of this is heard in "Another Boredom Movement." This piece emphasizes the blind following and eventual abandonment of stars by society: "and the masses keep begging for more / the grins of your puppeteers are beaming / because the quotas must be made / or your time in the spotlight will fade." The vocals on the album are smoother and more passionate about the message of the album. A far cry from the forced style heard on P86's debut release, Truthless Heroes continues the maturing process of Schwab's voice that began in Drawing Black Lines.

Musically this album is the most artistic P86 has produced so far. The band seems to focus more on the sound and delivery rather than the abrupt crunch and smack that swallows the vast majority of modern hard rock. Randy Torres's guitars especially set the somber mood of the album while the bass of Steven Dail and Alex Albert's drums direct its path. Just like the album's vocals, the music possesses a beautiful and deliberate growth which was also started in Drawing Black Lines.

Overall this is a great release. The lyrics are true and thought provoking while the music turns the pages of this tale. P86 fans definitely need this release and newcomers will also find a great addition to their current library.