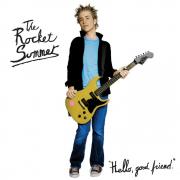 Bryce Avary, the 22-year-old wonder who comprises an on-the-bubble act known as The Rocket Summer, stares just past you from the cover of his recent album, "Hello, good friend." His gaze is just to the left of the camera, one eye squinting and the other wide open but focused on something other than what's immediately in front of him.

He looks a shade below five feet tall in this picture, although you have no way of telling just how closely the man's stature matches his prodigious talent. His body is thin and wiry, his hair flying off in a number of different directions and his posture slouched, as if the weight of the Fender guitar hanging from his shoulder is just a bit more than he can bear.

All of thisâ€”-the aesthetic stuff that is usually irrelevant to a music reviewâ€”-is important here because you would never know by looking at him that Avary's seemingly fragile frame could house a potentially phenomenal act like TRS. And it's also important because the gap between perception and reality is a theme that occupies at least two of Avary's best songs.

The first is "Tell Me Something Good," the album's fifth track, which features lyrics that seem ripped from a diary of Avary's most intimate thoughts. The yearning here is for a simple word that will tide him over until the darkness returns --"something good," as he puts it -- but then there is the frequent refrain of, "Why am I so misunderstood?"

Skip ahead to the tremendously infectious single "Never Knew," and the theme appears again. "I just ran into a few someones today," he begins, "some ones that I never really knew. And I used to think that I had them all so figured out... But no, none of it's true, 'cus [sic] I never knew you."

The "you" in that refrain may indeed be "You" -- the Jesus Avary unabashedly calls Savior m -- and it may be that Avary never really knew anybody until he began seeing the world through Christ's eyes. But it isn't clear, which again raises the question of interpretation -- of how things appear on the surface and how they really are. Perhaps that's the point here-â€”that the truth is elusive, that things are usually not as they seem. Perhaps Avary wants to make you understand him by making sure that you don't understand.

The chances are better that this review long ago crossed into the territory of over-analysis. But it's something to think about.

It bears mentioning that although there are some home-run cuts on Hello..., Avary's evolution as an artist is far from complete. Some of the weaker songs gain appeal on subsequent listens, but many lack the mass appeal of "Never Knew" or "Brat Pack," an excellent cut that deals amiably with the sentiments of anyone who went through high school as a misfit. The fact that Avary arranges and plays virtually all of the instruments on the album is only slightly short of remarkable, and taken alone many of the non-vocal performances are quite impressive. But as a unit many of the songs appearing late in this collection falter, lacking the polish and grab of those that appear in or around the middle.

But exceptions like "Destiny" and earlier tracks like "I Was So Alone" are strong as well, even if Avary's pop-oriented pipes and emotional lyrics sometimes threaten to cross into the realm of melodrama.

The Rocket Summer is not for everybody, especially not those who are purists when it comes to their rock and roll and cringe at the sound of any vocal that evokes memories of the boy-band era. But there is a certain appeal to this album, blemishes aside, that few with an open mind could deny. TRS is still a work in progress, but trust in this much: you will hear more of Bryce Avary in the future. As the album title suggests, this stage is the "hello," not the "goodbye." It's the beginning, not the end.